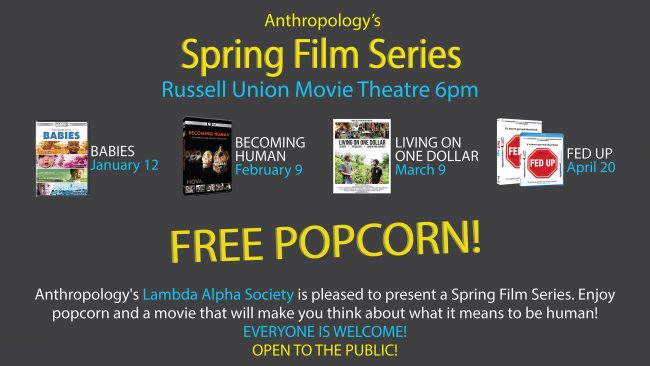 During each month of the spring semester, a film related to an anthropological topic will be screened. The Society plans to screen films of interest to a broad University audience that will encourage viewers to think about what it means to be human.

The first film, “Babies,” to be shown Jan. 12, looks at one year in the life of four babies from around the world, from Mongolia to Namibia to San Francisco to Tokyo.

The second film in the series, “Becoming Human,” to be shown Feb. 9, examines what the latest scientific research reveals about the human species, putting together the pieces of human’s past and transforming the audience’s understanding of the earliest ancestors.

The third film, “Living on One Dollar,” to be shown March 9, follows the journey of four friends as they set out to live on just one dollar a day for two months in rural Guatemala, facing challenges such as hunger, parasites and extreme financial stress as they attempt to survive life on the edge.

The final installment, “Fed Up,” to be shown April 20, examines America’s obesity epidemic and the food industry’s role in aggravating it.

All films will be shown in the Russell Union Theatre at 6 p.m. on their respective dates. The series is free and open to the public. Popcorn will be provided.

Lambda Alpha is the international honors society for students of anthropology. The name, Lambda Alpha, comes from the initial letters of the Greek words logos anthropou, meaning the ‘study of man.’ The Society was originally founded with the purpose of encouraging scholarship and research in anthropology. It provides funding for approved student activities, such as travel and professional conferences and seminars.