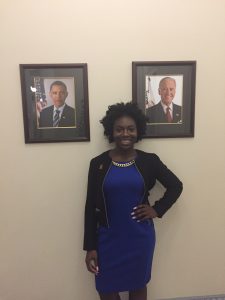 As the Obama administration came to a close, so did the White House internship of alumna Charisma-Kimberly Tataw (‘14, ‘16). Tataw had the opportunity to be part of the final internship class of the administration and couldn’t be prouder of her accomplishments there.

Tataw earned her bachelor’s degree in political science with a minor in chemistry from Georgia Southern in 2014 and completed her master’s degree in social science in 2016.

“I got into a few other schools, but I chose Georgia Southern,” said Tataw. “I can honestly say it was one of the best decisions I’ve ever made in my life. I am so proud to be a Double Eagle from the greatest University in America!”

The White House Internship Program, allows students and graduates to gain real-world experience, build leadership skills and serve the president throughout the year. As soon as Tataw learned about the program she wasted no time applying.

After submitting her application in hopes of getting one step closer to reaching her dream of being president one day, Tataw was granted an interview but was later denied the internship opportunity. She was determined to try again, and her persistence paid off.

“It was really wild how it happened,” she said. “I had just gone back home to Buford, Georgia after graduating  and started a full-time job with benefits, and then one day I got a call from the White House asking if I would be willing to be on the wait-list. I said, ‘yes,’ got a conditional acceptance, and in the span of about four days I quit my job, packed two bags and flew to DC!”

Tataw interned with the Office of Presidential Correspondence where she worked closely with a team to read letters to the president and choose the pieces that made it to his desk. Each day she worked on the comment line, an outlet where the public can deliver a verbal message to the president. Each evening, she and her team would run data analysis on the comments and emails and draft up a report to send to the West Wing.

One of Tataw’s most memorable moments from her internship was her team’s discovery of  a now popular letter from a six-year-old boy named Alex who wrote to the president asking him to take care of a young Syrian refugee who Alex hoped could be his new brother. The heartwarming letter has been mentioned in countless social media posts, newscasts and speeches including former President Barack Obama’s farewell address, and Tataw was part of the team that got that letter to the president’s desk.

In addition to the comment line, Tataw worked on projects, helped with guest speakers, read countless letters and sifted through emails throughout her four month long internship. But one of her favorite projects throughout her time was participating in a discussion panel hosted by the Office of Public Engagement for the Rise Sister Rise program.

“My most moving moment for a project was being asked to speak to a young women’s group from Ohio called Rise Sister Rise- a group of young black girls all high school age,” she said. “A few fellow interns and I were able to share our stories and give them advice on how to keep chasing after their dreams. It was such an exciting time to be in the White House telling others what we wish someone would have told us. Giving them courage and hope was uplifting to us as well.”

Aside from her office work Tataw also had the opportunity to network in DC. She worked for Fiona Reeves, director of the Office of Presidential Correspondence. She met former President Obama, former Vice-President Joe Biden and even hugged former First-Lady Michelle Obama, a memory which Tataw describes as an “out of body experience.”

Overall, Tataw is grateful for her time at Georgia Southern and the connections and opportunities her education has allotted her.

“This is single-handedly the most important thing I have ever done in my life,” said Tataw. “To go from applying on a whim, to finally stepping foot in the White House complex is a dream come true.”