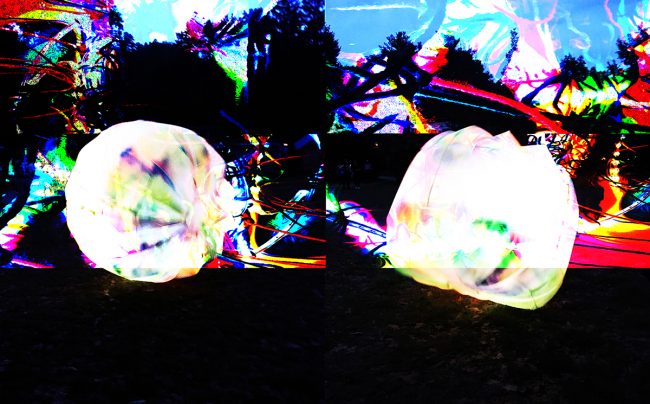 “Night Visions,” a painting and sculpture hybrid exhibit by Chicago-based artist Claire Ashley, will be presented at Georgia Southern’s Contemporary Gallery at the Center for Art and Theatre (CAT) from Feb. 15 to March 17. A lecture and reception will be held on Feb. 15. The Artist Talk will begin at 5 p.m. in Art Building, room 2071, with the reception to follow from 6 to 7:30 p.m. at the CAT.

“I wanted to bring Claire’s work here because it has a good combination of being challenging, while at the same time being fun and engaging,” said Jason Hoelscher, MFA, gallery director. “Art that poses big questions like ‘What is art?’ or ‘Why is this art?’ can sometimes be be dull or stuffy, but Ashley’s work is anything but. The notion of a painting as an inflatable surface – rather than a flat plane – is an interesting one from a theoretical point of view, but is also just plain fun to engage: who doesn’t feel a bit like a kid again when surrounded by big, weird, inflatable objects?”

Ashley’s work is deeply feminist and is particularly invested in exploding the structural possibilities of abstract painting, expanding kinetic possibilities for monumental sculpture and enlivening the dialogue around contemporary art by utilizing a deliberately egalitarian collection of humorous and formal entry points for multiple communities to engage with her work. “Night Visions” will transform the gallery into a nightclub-like setting using projections and internally lit inflating/deflating “breathing” painted sculptures.

“Claire Ashley’s work combines large scale – often considered, or at least intended to be read as, a sign of big, serious art – with a sense of fun and engaged interaction,” said Hoelscher. “The objects are painterly in ways that light up an art critic’s brain with interesting questions and problems, while also lighting up the pleasure or fun center of the brain. Much fun art is shallow, much ‘deep’ art isn’t necessarily fun or viscerally interesting, but Ashley’s work manages to bridge these divides.

“For that matter, as more and more of our cultural objects dissolve into the immateriality of screen space, there’s a real, visceral pleasure in being around objects and tangible things,” he continued. “With Ashley’s work, the fun becomes serious, the serious becomes fun, and the two combine to pose important questions about, and challenges to, what we have come to expect from art experiences in this second decade of the 21st century.”

All events are free and the public is invited to attend.

The Betty Foy Sanders Department of Art (BFSDoArt) is committed to offering quality undergraduate and graduate degree programs that prepare students to become professional artists, designers, art historians and industry leaders. The BFSDoArt is recognized as an accredited member of the National Association of Schools of Art and Design (NASAD). For more information, visit GeorgiaSouthern.edu/art.