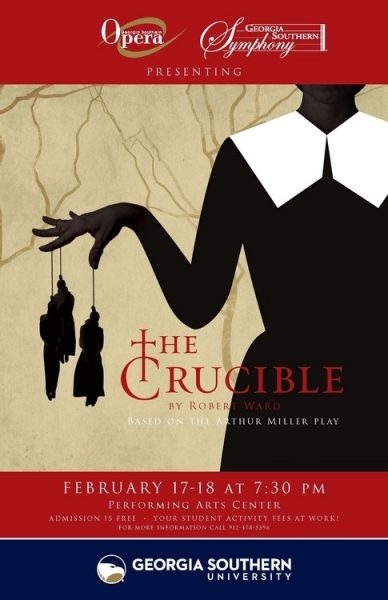 More than 50 students have come together to make this event a success. The cast, made up of 21 students, orchestra of 28 students and crew of 11 students, have been working on this production since October 2016. Jonathan Murphy, DMA, has worked diligently with the orchestra and singers to prepare these difficult scores. In addition to the students, faculty member and alumna Jillian Durant will join the cast in the role of Abigail and guest tenor.

“Opera is always a monumental undertaking, but this was a different challenge for GSO,” said Arikka Gregory, DMA, director of the GSO. “We are accustomed to working with lighter, often comedic, subject matter in our shows because those are the operas that are best suited to young voices. This is the first time in my 10 years at Georgia Southern that the opera students will perform a work this weighty, this dramatic, and this timely.”

The Arthur Miller play, on which the opera was based, takes place during the 1692 Salem witch trials and was written as an allegory for McCarthyism and the Red Scare, which occurred in the United States in the 1950s. Miller was himself questioned by the House Committee on Un-American Activities in 1956.

In the performance, several women and men in the town of Salem, Massachusetts are accused of witchcraft by a group of young girls led by Abigail Williams. Her jealousy of John Proctor’s wife, Elizabeth, leads Abigail to accuse Elizabeth of witchcraft. John himself is eventually accused and hangs rather than confessing, proclaiming that he would rather die than sully his family’s name.

“‘The Crucible’ has become a popular classic in American opera for good reason,” said Gregory. “The score is lush, challenging and powerful, yet so well-suited to the text and idiom that the ear seems to somehow recognize music it has not heard before. And the timeless story, though well-known by many, never loses its impact.”

Media or press are invited to attend evening rehearsals this week. Full dress rehearsal will take place on Wednesday and Thursday.

To learn more about the University ensembles, visit http://class.georgiasouthern.edu/music/ensembles/.