Georgia Southern alumnus’ exhibition ‘The Soul Within’ on display until Feb. 25 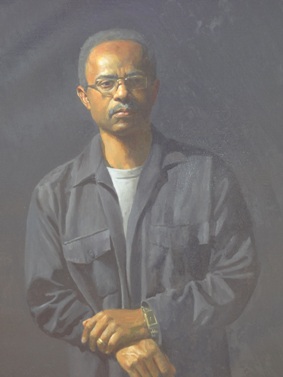 Cope’s self-portrait, “Focused on the Moment”

“The Soul Within,” an exhibition of the works of Georgia Southern alumnus Abner Cope (‘74), is on display for its final week in the Roxie Remley Gallery as part of the Averitt Center for the Arts’ African-American Series.

Cope was the first African-American student to graduate from the Georgia Southern art department, and was a painting student under Remley, for whom the gallery is named. Remley, now 97, recently visited the gallery to see her former student’s work. It was the first time they’d seen each other since his graduation.

“When we first encountered each other, we embraced and she said, ‘Well, I’m 97. How old are you?’” he laughed.

It was a special moment for Cope, who said it was professors like Remley who urged him on to graduate school, and whose example led him into teaching.

“When you’re impressed by a teacher, you want to do what they do,” he said. “That was a big influence on me.”

Cope’s exhibition is comprised of portraiture, both oil paintings and drawings, that attempt to capture the essence of his human subjects. He says he’s drawn to the human figure because of its tendency to change.

“I find the figure very interesting and very intriguing,” he said. “No matter when you draw the figure, you’re going to have a different interpretation of what you’re looking at. You could draw the same person in a different pose, in a different light — there are so many things that will change, so it’s forever fresh to me, always a fresh challenge.”

A native of Savannah, Cope recently moved back to Georgia after teaching for 30 years at Central State University, a historically black university in Wilberforce, Ohio. Cope and his work have been featured in several publications, including International Artist, which features accomplished artists from around the world. His award-winning artwork is featured in private and corporate collections throughout the Midwest, and a mural he painted hangs in the Hallie Q. Brown Library at Central State.