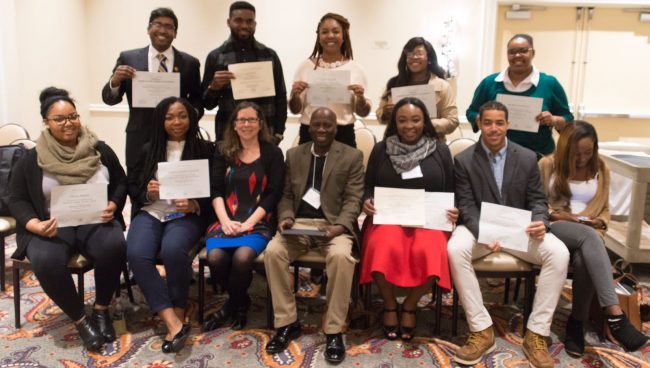 The University’s MAU, housed under the Center for Africana Studies, has competed in the National MAU for 27 years and has consistently earned best delegate outstanding leadership awards at the local and regional levels. This year the team brought two delegations to the competition, representing both Guinea and Senegal.

Associate Professor Saba Jallow, Ph.D., is the director of the Center for Africana Studies and the advisor for the team. For months, he worked with the delegates to train on writing diplomatic proposals, practicing negotiation strategies, researching and reaching a consensus using parliamentary skills.

“Experiential learning like this is a valuable tool for our students,” said Jallow. “It allows them to learn and understand how nations talk to one another and negotiate problems.”

Dylan John (‘16), first-year graduate student and Head of State for the Senegal delegation, knows the value in a program like the MAU. The Sri Lanka native hopes others will benefit from the MAU and Center for Africana Studies by expanding their cultural and global awareness.

“Knowledge and awareness of other countries and cultures is the only way to help diplomacy evolve,” said John. “I encourage my peers, especially those outside of the political science field, to broaden their horizons and engage in conversations outside of their own continent.”

“I would love to see the program grow in faculty, students and courses offered,” said Jallow. “There is a market here for this kind of education. Our geographic location is rich in history and the culture of Africa, and we need active participants to keep these stories, this culture alive in our area.”

Alumni of the Center have gone on to pursue doctorate degrees, work in politics and make meaningful global connections. Francys Johnson is a prominent local attorney and state president of the Georgia NAACP, Nebiyu Feleke (‘95) is a U.S. District Attorney in D.C., and Hans Holseth, a former MAU student delegate, joined the Norwegian Foreign Ministry Diplomatic Service and served in Angola as a diplomat. He currently works with NATO in Brussells.

“It’s amazing and impressive to see how well connected our University is on an international level, and many students don’t even realize it,” said John. “Dr. Jallow knows people in Parliament, powerful leaders and politicians in African countries. We can really offer students accessibility and connections that they may otherwise never see. This Center is a conduit of success beyond the classroom.”

To learn more about the Center for Africana Studies and the MAU, visit http://class.georgiasouthern.edu/africana/.