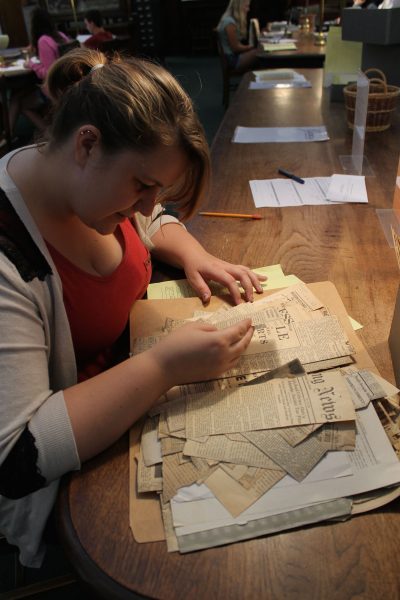 Sarah Ryniker (’15) examining a file of newspaper clippings at the Research Center of the Georgia Historical Society: Hodgson Hall, Gaston St., Savannah. Founded in 1839, the Society is a formal partner in the Wexford-Savannah Axis research project, based at Georgia Southern University.

When Sarah Ryniker (‘15) discovered a stack of handwritten letters, dated 1850 and penned by the late Richard Joseph Nunn, she could barely contain her excitement.

Sitting in the National Archives of Ireland in Dublin, she thumbed through the letters, many of which hadn’t been touched since they were originally opened, soaking up every word and learning how this man from the county of Wexford, Ireland, came to Savannah.

In the letters, Ryniker found that Nunn, an Irish immigrant who is credited for major public sanitation reform in and beyond Savannah, wrote to the Wexford-based Graves Shipping Company claiming to have the skills of a doctor and asserting, if granted passage to Savannah, he would be able to provide care for passengers on the ship. In other letters, she found additional exchanges between the shipping company and Nunn, and learned that Nunn was only 18 at the time he came to Savannah.

Ryniker knew how much of an impact Nunn made in Savannah as an Irish-American, but she was always curious as to how he made his way across the Atlantic.

“Getting to read how witty and sarcastic this man was made him feel alive to me, like I was there talking with him,” said Ryniker. “Those letters were a really fantastic discovery because we found out that he asked to go on a specific ship to Savannah called the Glenlyon and wanted to leave from the port of New Ross, Wexford.”

Howard Keeley, Ph.D., director of the Center for Irish Research and Teaching (CIRT) at Georgia Southern, has helped mentor Ryniker throughout her research, which has been made possible through the Wexford-Savannah Axis Partnership. The partnership, now in its fourth year, is a joint program through CIRT and the University Honors Program in which undergraduate students research archives in Savannah and in Wexford County, Ireland.

“We knew that, having witnessed his fellow Wexford and Irish immigrants die in large numbers in two yellow fever epidemics in Savannah, [Nunn] became a nationally recognized advocate for public sanitation,” said Keeley. “We also knew he was a Mason, but to find out how he got here in the first place, that was excellent.”

These discoveries about Nunn just skim the surface of Ryniker’s research throughout her time as a student at Georgia Southern. The soon-to-be Double Eagle will graduate in May with a master’s degree in social science, and she will leave quite an impact with the research she has completed, which she began as an undergraduate student.

Ryniker was part of the first group of undergraduate students to travel to Wexford County, Ireland, with CIRT and the Honors Program to participate in primary-source research, such as sorting through untouched letters and other documents in archives.

“When we started this project, our focus was absolutely on helping students to conduct primary-source research,” said Keeley. “In the general run of things, I feel we often ask students to research other people’s research. While important, that’s secondary research. In this case, however, much of the story of how Savannah is an Irish city has been lost, or was never fully put together in the first place. That lack of core knowledge requires a different kind of research.”

Participating in primary-source research as an undergraduate was a major draw for Ryniker when considering Georgia Southern. And through her trips to Ireland and research discoveries, she has come to appreciate the impact that she can make.

“This is a super-exciting way for students to get an in-depth level of research, exploring cultures and piecing together so many different aspects of what’s really going on,” she said. “It’s not classwork or an essay…you’re in an archive and seeing these real records and reading handwritten letters. We’ve gotten to untie letters that hadn’t been touched since they were first tied together and put in a box in around 1860.

“So being the first person to open a letter that may have been looked at once, it’s so profound and such a great way for undergrads to appreciate the way research can add to people’s lives,” she added. 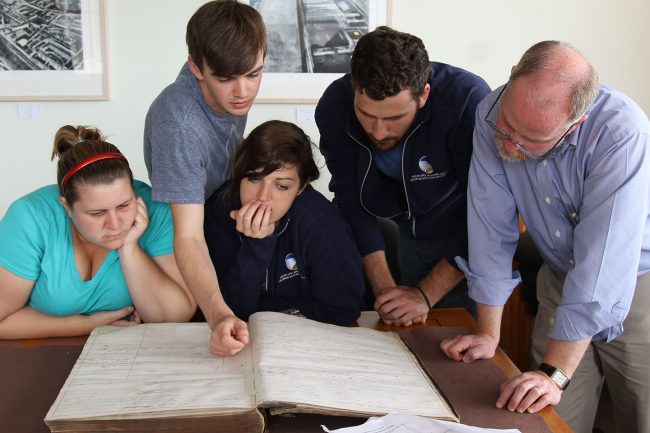 Since her first trip to Ireland, Ryniker has worked to create a database of all Irish families who immigrated to Savannah from Wexford County. The database not only provides valuable information to genealogists, but it is also a useful tool for academic inquiries into historical and contemporary issues around both migration and integration, said Keeley.

“Many nations and communities today are grappling with how or whether to absorb immigrants, and so one thing that Sarah’s database and her analysis is helping us to do is examine the effects of a discrete migration-integration phenomenon,” he said. “We can look at challenges the newcomers faced, and how they built communities.

“Sarah’s work is getting down to the granular level—how they constructed community within particular streets or neighborhoods, churches, schools and so forth,” Keely continued. “It also looks at how they integrated into the broader community, and there are lessons to be learned from that. We’re able to help people think about more complex issues that, today, are more relevant than they’ve ever been.”

Ryniker has found that the Irish settled in two main parts of Savannah -Yamacraw and Old Fort- and she has been able to narrow her research down to learn about the types of people who lived in these neighborhoods.

“I’m looking specifically at one street in Savannah, Indian Street in Yamacraw, known as District One in the 1860 census of Savannah. I’m analyzing the types of people who were living on that street, their occupations, and where they came from—the entire population, not just the Irish people,” she said.

“So, the Irish on this street were living next to African-Americans, living next to Germans; they were living next to a whole variety of different people and cultures, and they were doing jobs in, but also outside of, the railroad and shipping industries,” she continued. “A lot were bakers or shop owners, living above their jobs, having children, attending places of worship. You can see a ton of factors going on in how they gradually became Irish-American.”

And uncovering those stories of how the immigrants became Irish-Americans, and eventually Americans, is something Keeley said could be the next level of Ryniker’s research.

“What has not been told is this idea of integration—how, in the wake of the arriving generation of Irish, their children and children’s children started to expand their sense of identity,” Keeley said. “The initial migrants come not just with a strong Irish identity, but also a strong Wexford identity.

“Not everybody from Ireland is the same. Wexford has a unique history, blending agricultural progressivism, land activism, and revolutionary activity. Their Wexford legacies moved with the migrants to Savannah, equipping them in a certain way as they became Irish-American and then American.”

Uncovering these themes of immigration, integration and the identities of people who made Savannah an Irish community has inspired Ryniker to continue her studies in globalization and immigration, focusing on these themes in a contemporary sense as she pursues her Ph.D.

“I always thought I was interested in different cultures and exploring international studies, but really what I’m interested in is giving back to people and telling and sharing with them my findings,” she said, adding she hopes to become a professor one day.

“And I think this research project, more than anything I’ve ever done, has shown me you can make a difference as an individual. It’s definitely helping me do that, and will continue to do that in different ways after this project.”