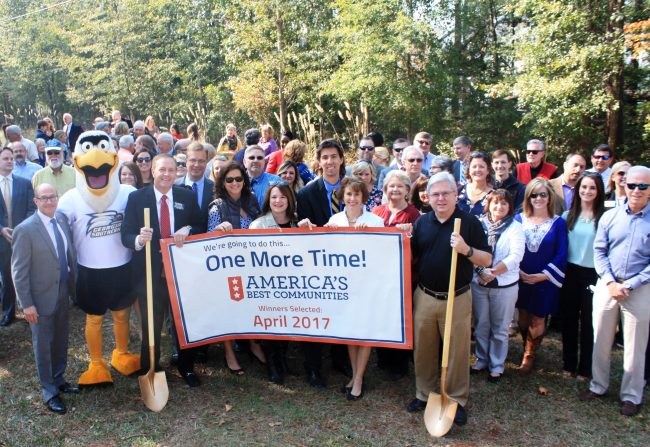 Grab your tennis shoes and brush up on your Statesboro trivia to compete for $300 in the Amazing Blue Mile Challenge on Saturday, April 8. Early registration runs through Saturday, March 18.

Teams of four or fewer can compete in this Amazing Race-inspired adventure expedition around the Blue Mile, a mile long stretch of road aimed to connect the Georgia Southern campus to the downtown Statesboro community. Participants will reveal clues to map their own course, completing mental and physical challenges along the way.

Suzanne Hallman, business advisor for the University’s Business Innovation Group (BIG), was inspired by similar fundraising events in Atlanta and Savannah, and wanted to create a challenge that would encourage both community members and Georgia Southern students to come together for a common purpose.

“As an alumna who came from out of town and decided to stay here, I know the importance of involving students in the community early on,” said Hallman. “We want to introduce students to the Statesboro community outside of campus, and we want the community to be engaged with what goes on at Georgia Southern. For me, it’s always been about tying together the community and the university.”

The winning team will take home $300 and a new knowledge of city and campus history.

Money raised through the Amazing Blue Mile Challenge will go toward revitalization efforts in the community, part of the America’s Best Communities (ABC) competition. The City of Statesboro is in the running for $3 million as part of the final eight communities in the ABC competition. The winning community will be announced on April 19.

Registration is $40 per team through Saturday, March 18 and $60 per team after that. Participants who register early are eligible for a free t-shirt while supplies last. Click here to register.

For more information on the Blue Mile and the Amazing Blue Mile Challenge, visit theborobluemile.wordpress.com.

“We are excited that this is a new type of race for Statesboro,” said Peyton Fuller, accountant at the University and committee organizer for the Challenge. “We are hoping that it brings more awareness to the Blue Mile and all that downtown Statesboro has to offer. We want citizens, visitors, and college students to know more about businesses and community activities that make Statesboro such a great place. “

About the Blue Mile
The Blue Mile is project of the South Main Street Revitalization Committee. This committee is a grassroots organization made up of community leaders, volunteers and organizations. The goal of this committee is to upgrade and enhance the South Main Corridor and to encourage the private redevelopment of outmoded, highway-oriented commercial development into pedestrian friendly, mixed-use centers to achieve the vision set forth in the 2011 Statesboro Downtown Master Plan and 2014 Comprehensive Plan.

In reaching this goal, the committee hopes to restore the one mile stretch of South Main Street from the entrance of Georgia Southern University to the Courthouse in Downtown Statesboro to its former glory in a manner that adds economic value to the city’s tax base, beautifies residential and commercial areas, attracts and retains creative students and young professionals, and enhances the quality of life.

About America’s Best Communities
Sponsored by Frontier Communications and DISH Network, the America’s Best Communities Prize (ABC) is a campaign that dedicates over $10 million in cash and other rewards to support and inspire the kinds of creativity and innovation that transform communities and result in long term growth. With a grand prize of $3 million, the competition taps into the competitive spirit of towns and cities across Frontier’s 27 state footprint by challenging communities to dream big and improve lives.