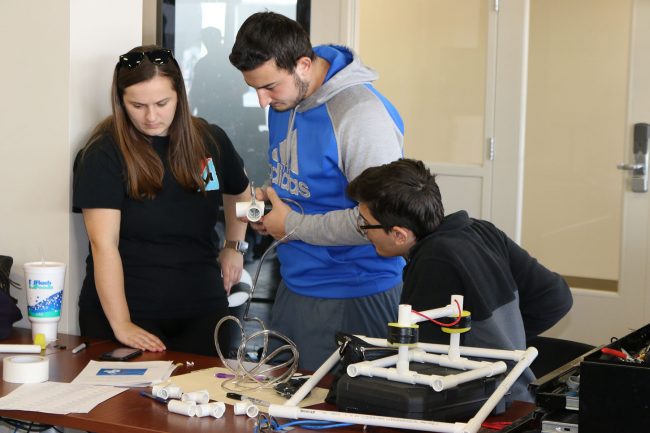 All engineering students were invited to attend the build workshop where they formed teams to help build props at eight stations. The workshop was held Feb. 11 at the Business Innovation Group’s FabLab and Innovation Incubator in downtown Statesboro.

“Volunteering for this project was the first time I was introduced to the FabLab,” said Blair Hanna, senior engineering major. “It’s a very useful resource because it has a lot of power equipment and other equipment needed for projects such as this and others. It introduced me to equipment I never had the chance to work with, which I will probably be needing to use in my career as an engineer.”

Although the Georgia Southern students are not competing this year, Kania Greer, Ed.D., project development specialist for i2STEMe , hopes that having students work on the backside of the competition will encourage them to compete in the future.

“Our students are not competing this year, but being a part of the prop building has inspired many of them to want to participate next year,” said Greer. “Many of these same students will be volunteering on the day of the event — April 22 — in Savannah as mission judges, technical and safety inspectors, and deskside support.”

The following engineering students participated in the Build workshop:

“We could not have gotten as much of the prop building done as we did without the support of the students,” added Greer. “Their time and energy were invaluable. Gray’s Reef National Marine Sanctuary was thrilled to have the students volunteering and expressed deep gratitude for the help.”