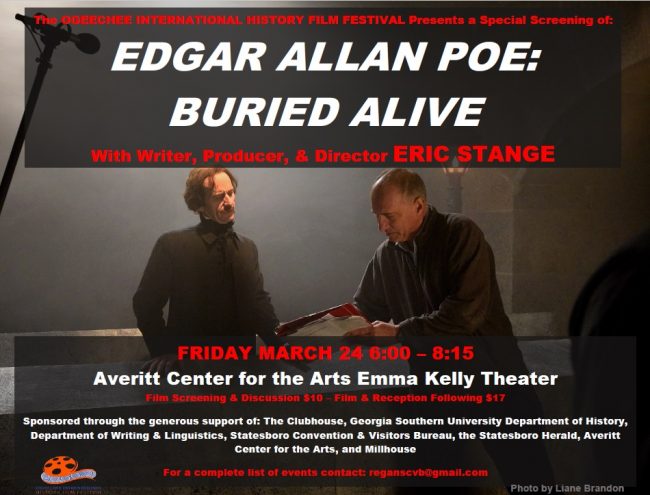 The Ogeechee International History Film Festival — the first and only film festival of its kind in the nation — is set to open on March 24 at the Averitt Center for the Arts’ historic Emma Kelly Theater, and continue on March 25 at the Russell Union Theater on campus.

According to festival coordinator and history graduate student Regan Everett, the departments of History, Writing & Linguistics, Communication Arts and Political Science & International Studies are sponsoring the event on behalf of Georgia Southern. They are partnering with the Statesboro Convention and Visitors Bureau (SCVB), Averitt Center for the Arts, the Statesboro Herald, the Clubhouse and Millhouse to bring this festival to the entire Statesboro community.

“While the Smithsonian Institution hosts an annual film forum to highlight work about U.S. history, the Ogeechee Film Festival is the only open-submission, international history film festival in the nation,” said Michael Van Wagenen, Ph.D., associate professor of history and public history coordinator.

The first day of the festival includes an advanced screening of producer/director Eric Stange’s latest film, “Edgar Allan Poe: Buried Alive,” which will be broadcast later in the year as part of the PBS American Masters series. Following the showing, there will be a question and answer session with Stange and a reception with filmmakers. Tickets can be purchased here, or in person at either the Statesboro Herald or the SCVB.

The second day of the festival, located at the Russell Union Theater, includes screenings of feature length and short historical documentary films. Between these films, various filmmakers will participate in discussion panels to talk about their experiences portraying the past and reality on screen and television.

The final panel of the night will feature a discussion with Eric Van Wagenen, executive producer of “Celebrity Apprentice.” He will talk about his experiences as one of America’s foremost reality television show runners including how he got his start in the business, his years working in television and where he sees the future of the genre.

All showings at the Russell Union are free.

That evening, a closing reception will take place at the SCVB. Awards will be presented to filmmakers to recognize their achievements in producing films of historical excellence. There will be cash prizes for best professional and student work. Tickets for the awards ceremony are $10.

“Everett has spearheaded a unique event here at Georgia Southern,” continued Michael Van Wagenen. “She has put together an impressive program, and seven of the featured filmmakers will be at the festival to speak to us about their work. This will be a fantastic opportunity for those in our community interested in the arts and humanities.”

While professional and amateur filmmakers from around the globe are invited to participate, the public is also encouraged to attend the showings, panels and reception.