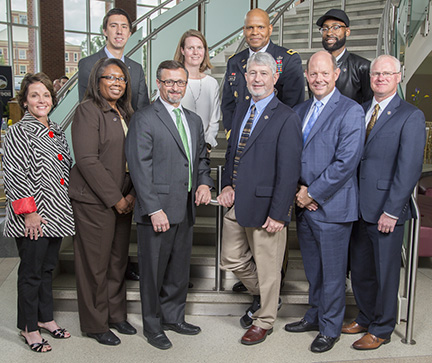 The Association presented its 2017 biennial Alumni Awards at a campus luncheon held this past Saturday, March 25.

The following alumni were recognized for outstanding achievements in their respective fields:

Teresa A. MacCartney, Alumna of the Year
Teresa MacCartney has served as chief financial officer for the State of Georgia and director of the Governor’s Office of Planning and Budget (OPB) since her appointment by Gov. Nathan Deal in 2012. She began her career in the Governor’s Office of Planning and Budget (OPB), later becoming the senior policy advisor for budget and governmental affairs at the Georgia Student Finance Commission. In 2005, MacCartney returned to OPB as director of the Education Division and was promoted to deputy director in 2010. MacCartney serves as secretary of the Board of Directors of the OneGeorgia Authority, vice chair of the Georgia Higher Education Facilities Authority Board and is on the Board of Directors of the Georgia Lottery Corporation and Georgia Higher Education Savings Plan. She is a member of the Georgia State Road and Tollway Authority Board, State Depository Board, Employee Benefits Plan Council, National Association of State Budget Officers’ Executive Committee and Georgia ABLE Program Corporation Board. She also sits on the Board of Trustees of the Leadership Georgia Foundation. She earned a Bachelor of Science degree in mathematics and a Master of Public Administration degree from Georgia Southern.

Mike R. Davis, Alumnus of the Year in Professional Achievement
Mike Davis serves as executive director and CEO of the U.S. Golfing Association (USGA) – the seventh in the organization’s 121-year history. Davis is the senior staff member of the USGA, responsible for managing all aspect of the Association’s day-to-day operations, including core functions, essential programs and human and financial resources. Working closely with the USGA president and Executive Committee, Davis provides overall strategic guidance, serves as spokesperson with internal stakeholders and external constituencies, and represents the USGA’s interests within the golf community, courses and clubs, state and regional golf associations, the media, and national and international golf associations. He is also a board member of the International Golf Federation, the World Golf Foundation, Official World Golf Rankings, the World Golf Hall of Fame, and the Captains Club. Davis graduated from Georgia Southern University in 1988 with a bachelor’s degree in business administration, and was a member of the University’s golf team and Sigma Chi Fraternity.

Major General Leslie C. Smith, College of Business Administration Alumni Award
Maj. Gen. Leslie C. Smith serves as the Deputy Inspector General, Office of the Secretary of the Army. Smith’s previous assignment was the Commanding General of the United States Army Maneuver Support Center of Excellence and Fort Leonard Wood. Smith received his commission from Georgia Southern University in 1983 as a field artillery officer. In 1985, he graduated from the University with a bachelor’s degree in accounting as a distinguished military graduate and entered the Army as a chemical officer. His awards and decorations include the Distinguished Service Medal, Legion of Merit, Bronze Star Medal, Defense Meritorious Service Medal, Army Commendation Medal and Joint Service Achievement Medal. Smith also holds a Master of Science degree in administration from Central Michigan University and a Master of Arts degree in national security strategy from the National Defense University.

Mychael Knight, College of Health and Human Sciences Alumni Award
Since his successful run on the Bravo hit show “Project Runway,” Mychael Knight has been excelling in the fashion industry. In addition to being sought after for his design aesthetic and fashion styling for celebrities such as Khloe Kardashian, Jagged Edge, 112, Jennifer Hudson, Tarji P. Henson and Toni Braxton, his designs have been displayed in a variety of print publications including The Atlantan, Elle, Essence, Marie Claire, Ebony, Black Enterprise YRB and The New York Times. His design and creative direction has also been sought from corporations including Starbucks, Louis Glick, Nike and Coca-Cola. Knight earned a Bachelor of Science degree in fashion merchandising and apparel design in 2001.

Chris Rustin, Dr.P.H., Jiann-Ping Hsu College of Public Health Alumni Award
Chris Rustin is a professor of public health at Georgia Southern who previously served as the director of the Environmental Health Section for the Georgia Department of Public Health. He was responsible for supervision and statewide oversight of food safety, land use public swimming pool, spa and recreational water park safety, tattoo safety, tourist and lodging safety, chemical hazards, indoor tanning safety, healthy homes/lead poisoning prevention, entomology and surveillance, and environmental health emergency preparedness programs. Rustin managed and oversaw a staff of 430 Environmental Health professionals at the state, district and county Health Department level. In addition to a Bachelor of Science degree in biology, he holds a master’s degree in safety and environmental compliance, and a Doctorate of Public Health with an emphasis in community health.

Dawn H. Cartee, Ph.D., College of Education Alumni Award
After serving nine years as president of Ogeechee Technical College, Dawn Cartee became director of the University of Georgia Center for Continuing Education and Hotel in 2016. She oversees a 300,000 square-foot facility that includes meeting rooms, auditoriums, offices, two restaurants, banquet services and a 200-room hotel. The Center hosts more than 1,700 events each year, drawing about 95,000 participants. She manages a staff of 400 and an annual budget of $23 million. She was named Business Leader of the Year by the Statesboro-Bulloch Chamber of Commerce in 2011 and a Deen Day Smith Service to Mankind winner in 2010. She is a previous College of Education Alumna of the Year. Cartee earned her doctorate in educational administration, an education specialist degree, a master’s degree in education and bachelor’s degree in business administration, all from Georgia Southern.

Russell R. McMurry, PE, Allen E. Paulson College of Engineering and Information Technology Alumni Award
Russell McMurry serves as commissioner of the Georgia Department of Transportation, a $3.6 billion, 4,000-employee state agency responsible for planning, designing, constructing, maintaining and operating Georgia’s state-owned transportation system. Georgia has the 10th largest transportation system in the country. He began his career with the Department in 1990 as an engineering trainee and has served in a variety of roles that include construction project manager, district engineer, director of engineering and chief engineer. He graduated cum laude from Georgia Southern and is a registered professional engineer in the state of Georgia.

Dr. Louvenia A. Rainge, College of Science and Mathematics Alumni Award
Louvenia A. Rainge has crafted a successful career in the dental profession, including being named an Honorable Fellow of the Georgia Dental Association and a Fellow of the Pierre Fauchard Academy and the American College of Dentists. She has earned the Eastern District Dental Society President’s Award; the Georgia Dental Association Committee Award, Council on Dental Health; the Augusta Dental Society President’s Award; and the Dental College of Georgia Distinguished Alumna Award. After earning her bachelor’s degree in biology from Georgia Southern in 1983, Rainge completed the Harvard University Pre-dentistry Health Professions Program and graduated from the Dental College of Georgia.

Eugene (Nick) Wiley, Department of Biology Alumni Award
Nick Wiley is executive director of the Florida Fish and Wildlife Conservation Commission. He rose through the ranks from a wildlife resource biologist to his current position and serves as president of the Association of Fish and Wildlife Agencies and executive director of the Florida Fish and Wildlife Conservation Commission. A certified wildlife biologist, his work has been published in journals including Journal of Wildlife Management and Conservation Biology. Wiley is chair of the College of Science and Mathematics Advisory Board, a National Conservation Leadership Institute Fellow, a member of the Boone and Crockett Club, and a member of the North American Wetlands Conservation Council. He also previously served on the State and Federal Joint Task Force on Endangered Species Act Implementation. He earned a Bachelor of Science degree in biology from Georgia Southern in 1983 and a Master of Science degree in wildlife management from Auburn University in 1986.

Wiley and Range, both COSM graduates, are also from Brantley County, Georgia, and graduated from the same high school there. Rainge was valedictorian and Wiley was salutatorian of their high school graduating class and both chose to attend Georgia Southern.

“Honoring our outstanding alumni is truly a privilege,” said Wendell Tompkins Jr. (‘87), senior director of Alumni Relations and Annual Giving. “They have distinguished themselves as the best and brightest in their fields, and they represent Georgia Southern in a manner that makes all of the Eagle Nation proud to claim them as our own.”