Georgia Southern hosts Walk a Mile in Her Shoes 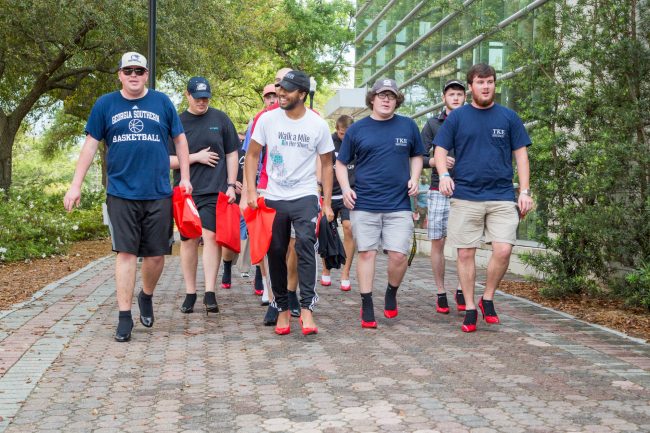 Today, Georgia Southern University held its fifth annual Walk a Mile in Her Shoes®, an event where men walk in high-heeled shoes to increase awareness about sexual violence.
“Walk a Mile in Her Shoes® is a lighthearted, educational event that aims to raise awareness and encourage communication about gender relations and sexual violence,” explained Michele Martin, University Wellness director. “All of the proceeds from this event will be donated to the Statesboro Regional Sexual Assault Center, which offers free help to survivors of sexual assault in Bulloch, Jenkins and Screven counties. Last year, we were able to donate $3,200 to the center from all the sponsorships and individual donations.”
Nearly $10,000 from the event has been donated in the past five years.
The walk is intended to encourage conversation about the sexual violence happening in the Statesboro area, help victims and figure out how to prevent these attacks. Organizers say it is important for men to join the cause since research shows 90 percent of adult rape victims are female and the majority of perpetrators are reported to be male, according to the 2010 National Intimate Partner and Sexual Violence Survey Data.
“Women who have been hurt, physically or mentally, by any kind of sexual violence including harassment, are the sisters, mothers, aunts, cousins, girlfriends and friends of men, and by extension, those men have to deal with it, too,” said Laura Agnich, Ph.D, assistant professor of criminal justice and criminology. “This issue affects everyone. The goal is to get all of Georgia Southern talking about ‘that walk’ where guys walked in heels to raise awareness about sexual violence.’”
Walk a Mile in Her Shoes® is hosted by the Sexual Assault Response Team, University Wellness Program, Health Services, Sexual Assault Student Educators, and The Department of Criminal Justice and Criminology.
Georgia Southern University, a public Carnegie Doctoral/Research University founded in 1906, offers 119 degree programs serving 20,673 students. Through eight colleges, the University offers bachelor’s, master’s and doctoral degree programs built on more than a century of academic achievement. Georgia Southern is recognized for its student-centered and hands-on approach to education. Visit GeorgiaSouthern.edu.