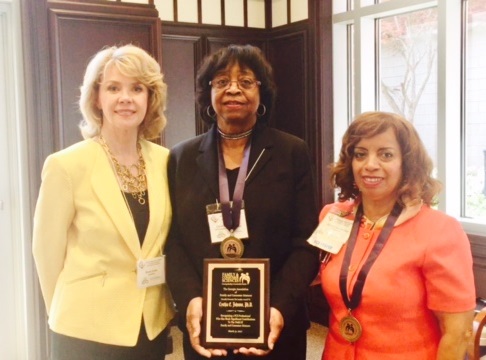 Cynthia Johnson, Ph.D., chair of the Georgia Southern School of Human Ecology (SHE), received the Georgia Association of Family and Consumer Sciences (GAFCS) Leader Award for her significant contributions to the field of family and consumer sciences (FCS).

Johnson was presented the award during the 2017 GAFCS Annual Conference in Athens, Georgia, on March 31, by GAFCS President, Karen Jones, and Vice President of Awards and Recognition, Arlene Fitts Winfrey.

Johnson was recommended for the Leader Award due to her extensive background in program development and the leadership roles she has upheld throughout her career. In addition, Johnson was recognized nationally in 2016 as a FCS legend by American Association of Family and Consumer Sciences for establishing the first national doctoral program in medical family therapy and for her work in child and family relations.

“Former faculty, and other FCS administrators know of my dedication, commitment and contribution to the field, and those are the individuals who supported the recommendations,” said Johnson.

Johnson currently serves as the vice president for professional development on the Executive Board of GAFCS, and on the 2018 Local Arrangements Committee.

To learn more about SHE, visit GeorgiaSouthern.edu/SHE.