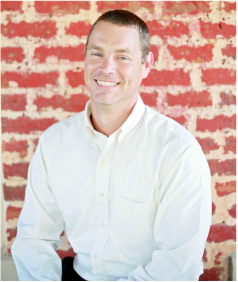 Although he’s managed to own businesses, work for the government, coach soccer, raise four kids and publish several successful novels — all with only a high school diploma — Ashley “Blue” Cole says his story is far from ending.

Cole, a 40-year-old non-traditional student, is determined to rewrite his own story by staying focused, maintaining balance in his life, and earning his bachelor’s in general studies online from Georgia Southern University.

“I think this degree will challenge me to look at things from a younger perspective,” he said. “Everything that I’ve accomplished within the state, my businesses, my family, has all been with a high school diploma. I’ve missed out on opportunities because I didn’t have a degree. Hopefully this degree will increase my opportunities and I can continue to move up.”

The key, he says, is discipline.

“It’s hard to balance such a busy life,” he said. “You just have to sit down, put your ass in your seat and finish your work. There’s no other secret to writing. I write an hour a day, five days a week, 700-1,000 words a day. When you finish, pat yourself on the back, pour a drink and start another idea. Just keep going, whatever your goal is.”

Cole chose three tracks for his degree: public administration, business and writing. The first two he hopes will help develop his current skill set and business aspirations. The final, he knows, will ultimately enhance his childhood calling — being an author.

When Cole was first published in his fifth grade literary magazine, the author thought he’d hit the big time. From that moment on, he knew writing was part of his destiny.

He continued to write throughout middle and high school. Cole graduated from East Coweta High School in Coweta, Georgia, in 1995 and found that he wasn’t quite ready for the academia of college life.

“My first trip through college was more of an adventure than an education,” he joked.

Instead, Cole took his drive and charisma into the business world, first in the pizza business and then in a DNA/blood-testing business with his wife.

It wasn’t until 2008, on a late-night drive from Albany, that Cole came back to his childhood calling. He passed an old, shabby bar called Ricochet, and the ideas started flowing.

Shortly after, he published four short stories, followed by novellas, and finally novels.

Although Cole has published several pieces, his most recent work of fiction, Evil Upriver, is by far his favorite. The novel, connected to his previous books, tells the story of a songwriter traveling through a small southern town. The character slowly finds the town changing around him, and he must decide if the evil upriver is the strange new bar from Cole’s first published story, Ricochet, or if it’s connected to the abandoned mine that overlooks the town.

“When you write a novel, all the different parts of the novel have to propel it forward,” he said. “This is the first one where I really feel like I pull off a full story.”

He hopes this determination to increase his own knowledge and his choice to come back to school will change his legacy.

“I asked myself, ‘In two years, do you want to be 42 with a college degree, or 42 with a high school diploma?’ I really thought about it, and I decided to make this decision for myself, my family and my writing,” he said.

Since finishing his first semester in May, Cole could not be prouder of his decision to come back to school and happier that he chose a flexible online program like that at Georgia Southern.

“I absolutely love it here,” he said. “I’ve been to other schools, but there is no other faculty or staff or people like I have found at Georgia Southern. My only regret is not having done this years ago.”