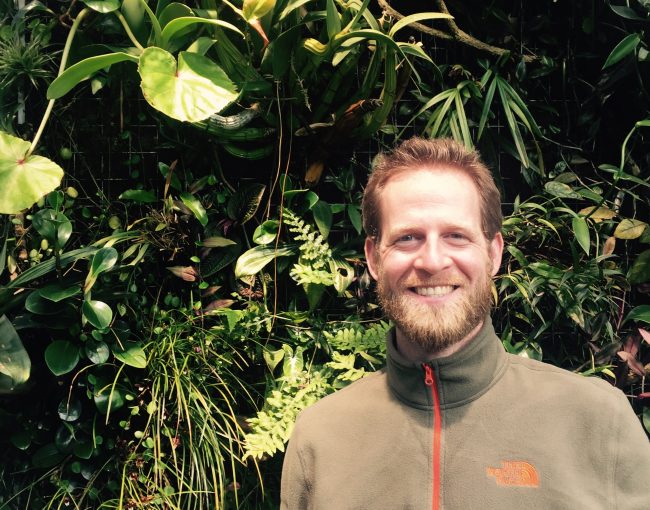 Imagine a character so powerful, so toxic, that it could take over the world- well, the world’s forests at least. John T. Van Stan, Ph.D., assistant professor of geography, is bringing this character, and many others like it, to life, while educating the public on the impact invasive and native tree species have on water.

The idea for these characters and subsequent graphic novel, Plant Invasion Alters Canopy Ecohydrology, came about when Van Stan was asked by Moein Sadeghi, a doctoral student from the University of Tehran, in Iran, to look over some rainfall data from the city’s urban forest. As they began to comb through the numbers with scientists from Germany (Jan Friesen, Ph.D., Helmholtz-Centre for Environmental Research) and Canada (Tom Pypker, Ph.D., Thompson Rivers University), they noticed a some pretty significant findings.

The data revealed much more than just a change in precipitation reaching the surface. They discovered that an invasive plant species, the China indigenous “Tree of Heaven,” that had taken over parts of the city forest, was funneling significant amounts of rainfall to its stem, possibly pushing a poisonous flow of root toxins throughout the area. This release of chemicals can make other competitive native plants nearly obsolete.

Because the invasive trees grew so large and staggered, they eventually formed a large canopy over the city’s forest, acting as an umbrella that deprived the soil of rain. Much of the water that did reach the soil, flowed down the trunk of the trees and into its toxic root system, causing the native plants below the canopies to become dehydrated and poisoned.

Although Van Stan was fascinated by this invasive species’ stemflow and its impact on water resources, he couldn’t help but feel others were more underwhelmed at the same concept.

“I think everyone should be interested in how trees partition rain,” he laughed. “But the reality is, more science majors are interested in polar bears, dolphins, animals. There is only a small interest in plant science.”

He began to wonder why plant sciences weren’t as popular as many other areas of study. As he mulled over his concerns with a friend of his, Bagus Seta, an artist at the Savannah College of Art and Design, he came to an exciting conclusion.

“I think part of this is that we don’t have a lot of plant characters in the entertainment world that the public can relate to,” he said. “Maybe if there were more relatable plant characters that represented what plants do in the world, how interesting they are, we could groove the interest in student population toward plant sciences.”

Soon after Van Stan published the comic on ResearchGate, what he calls “Facebook for researchers,” he noticed his read-count data skyrocket. The read throughs of this publication were nearly seven times what his typical rate was. In fact, many people who read through the comic went on to read his accompanying research paper at a much higher rate than usual.

“Clearly this graphic novella was being consumed at a greater amount, by more people, than a paper would have been,” he said. “It funneled a lot of scientists who otherwise might not have read my paper to my work.”

Since making this connection, Van Stan has been more committed to raising public interest in the plant sciences as a whole.

“I think science literacy is becoming cool,” said Van Stan. “We spend so much time trying to impress our fellow scientists that we forget that part of the value of science, a small part albeit, is entertainment. People like to know things. People find that fun. Why not make them want to share plant knowledge?”

Van Stan plans to continue his collaborative work on developing graphic novellas involving these plant characters with the hopes of informing the public of the impact plants can have on a community. He is also interested in creating a video series, as inspired by his work with MinuteEarth, to add to the entertainment value of plant-life education.

For more information on the Department of Geology and Geography, visit GeorgiaSouthern.edu/cosm.