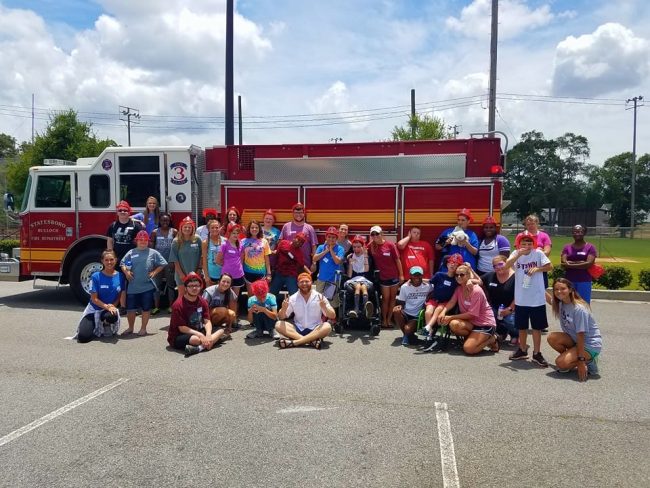 For the past five years, Georgia Southern faculty, staff and students have been helping bridge the gap between school and community for local youth with disabilities through Camp RAD.

Camp RAD, or Recreation for Adolescents with Disabilities, has been coordinated by College of Health and Human Sciences associate professors, Gavin Colquitt, Ph.D. and Katy Gregg, Ph.D., in partnership with Statesboro-Bulloch County Parks and Recreation Department and The Therapy Spot. The camp is open to youth ages 10 to 22.

Steven Waldrop, senior public health, health education and promotion major, has worked with Camp RAD as the student coordinator for the past two summers. In his role, Waldrop maintains the schedule and creates most of the programs and activities for the campers.

“My favorite activities at Camp RAD would be any activity that promotes the development of a life skill,” stated Waldrop. “I love being able to teach the campers skills that allow them to be more independent.”

During the four-week camp, participants spent their days dancing, learning sports, making their own snacks and learning how to self-advocate. Since most of the campers face barriers accessing organized recreation and learning during the summer months, Camp RAD provides the opportunity for campers to maintain their learning schedule while having a traditional day camp experience.

“They receive a highly stimulating and social environment that helps with their transition to independence,” said Waldrop.

According to Waldrop, campers are provided transition periods to prepare for their next activity, and most campers socialize and create new friendships during this time. “These relationships last beyond Camp RAD and help to develop their community within Statesboro,” he said.

Senior child and family development major Naomi Cook participated as a camp counselor for the first time this summer. Witnessing the daily growth of each camper was her favorite part of Camp RAD.

“The first day, I was told a camper was nonverbal and shy, and I saw this for the first few days because he would always sit in the back and only communicate to me by using different gestures as a response” said Cook. “As camp progressed, he began talking up a storm to me, and during the activity on community helpers, he went up in front of all the campers and camp counselors and said he wanted to be a firefighter. It melted our hearts and even left some of us in tears.”

Georgia Southern University students enrolled in the Health and Physical Activity Promotion for Exceptional Youth course spent one week assisting and serving as camp counselors to the 25 campers, and then two weeks leading all camp activities. Dietetic interns in the School of Health and Kinesiology led activities the first week of camp that focused on teaching campers about nutrition. Other special visitors included the Tormento FC, Statesboro Fire Department and Sacred Space Yoga.

Camp RAD is funded by Easter Seals and the Georgia family support fund. For more information on CHHS, visit GeorgiaSouthern.edu/CHHS.