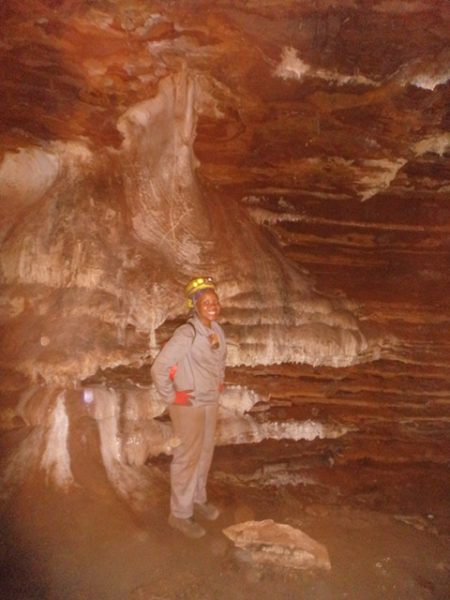 Nompumelelo Hlophe, graduate student at Georgia Southern, stands in a cave while exploring the Rising Star Cave system in Africa.

Nompumelelo Hlophe, a graduate student in the Department of Sociology and Anthropology at Georgia Southern, co-authored a paper with University alumnus and scientist Lee Berger, Ph.D.,  D.Sc., (‘89) about the latest information on Homo naledi, skeletal remains discovered by Berger in 2013.

Hlophe, who is pursuing a Master of Arts in social sciences, co-authored the article, “New Fossil Remains of Homo naledi from the Lesedi Chamber, South Africa,” which was published in eLife Journal.

The article explains how Berger and other scientists have dated the bones found in 2013 at the Rising Star Cave System near Johannesburg, South Africa. They determined Homo naledi lived between 335,000 and 236,000 years ago in a similar time frame as our own descendants, Homo sapiens.

“Working with Dr. Berger is an opportunity that any scientist or anthropology major would be proud of, and I am honored to work with such an inspirational man,” said Hlophe, who noted she began working with Berger as an exploration technician, or caver. “Dr. Berger is a busy man, but he always has time to check up on his team. I would not be where I am today if it was not for Dr. Berger. Through his wisdom and his teachings, I have learned to strive for success and make the knowledge of anthropology available to those who do not have knowledge of it.”

These recent discoveries have gained the attention of several other major news outlets as well, including USA Today. The published research includes not only the age of the Homo naledi fossils, but also a new discovery of a second chamber in the Rising Star Cave system, containing additional specimens of Homo naledi.

These specimens include one of the most complete skeletons of a hominin ever discovered, as well as the remains of at least one child and another adult. Hlophe was one of the archaeologists who answered Berger’s call to help explore the cave system.

“My first journey through the Rising Star Cave System is one I would never forget,” she said. “My first trip was in November 2014. I remember before going in the cave, the leader was going over the rules, and I was scared, but at the same time I was so excited knowing that I would be going through a historical cave system.

“When in the cave, I was prepared for the worst, and since I am short, I was sure I was going to struggle,” she continued. “After a six-hour trip through the cave (with breaks in between) I knew there that this was meant for me, and I was not turning back. Yes, I did gain a fair share of bruises and scratches, but they are scars I am very proud of.”

This new data has a dramatic effect on what is known about human history.

“We can no longer assume that we know which species made which tools, or even assume that it was modern humans that were the innovators of some of these critical technological and behavioural breakthroughs in the archaeological record of Africa,” says Berger. “If there is one other species out there that shared the world with modern humans in Africa, it is very likely there are others. We just need to find them.”

This additional discovery has led the research team to argue that there is more support of the controversial idea that Homo naledi deliberately disposed of its deceased in these hard-to-reach caverns.

It also has led to more detailed information about the remains and that they have primitive features shared with some of the earliest known fossil members of species that lived nearly 2 million years ago. Additionally, the remains also share some features with modern humans.

Berger graduated from Georgia Southern in 1989 with a bachelor of arts in anthropology and holds a Ph.D. and D.Sc. in palaeo-anthropology from the University of Witwatersand in South Africa. He is currently a Research Professor in Human Evolution and the Public Understanding of Science at the University of Witwatersand as well as an Explorer in Residence at the National Geographic Society. 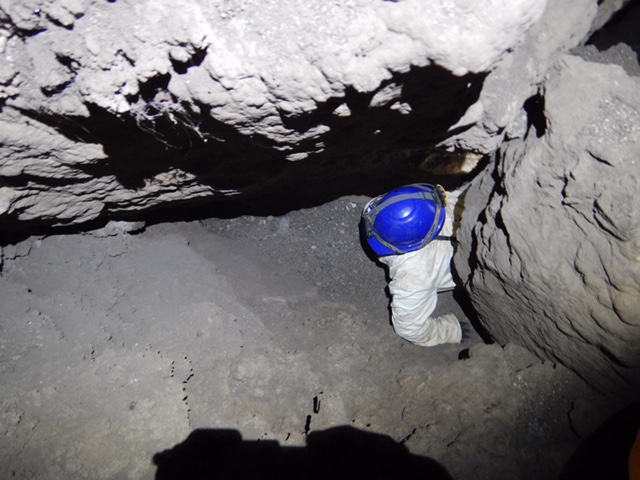 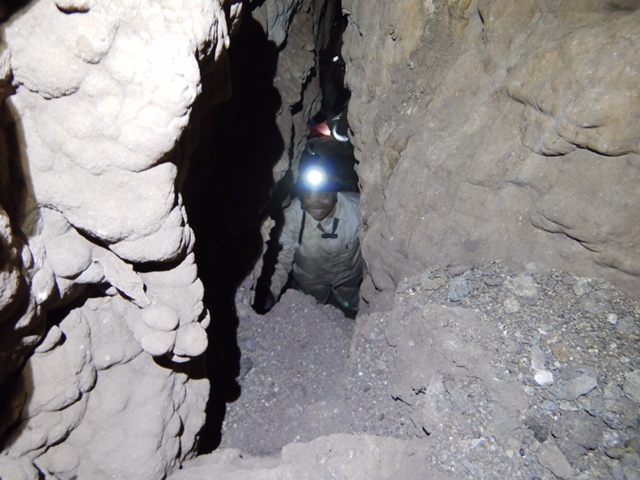