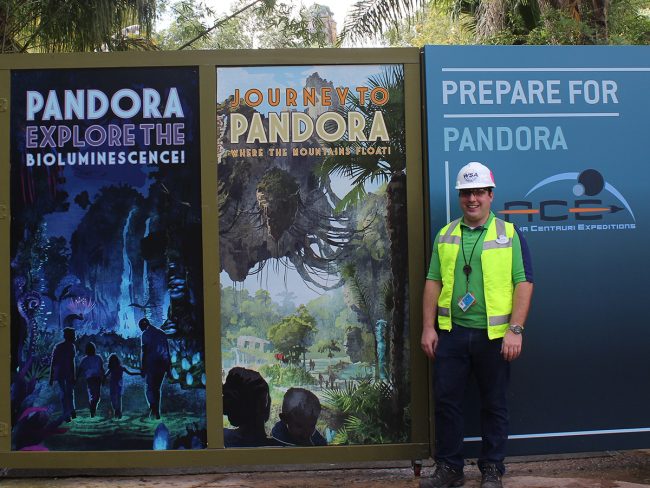 Georgia Southern alumnus Aaron Clay (’11) stands in front of the construction wall of Pandora — The World of Avatar at Walt Disney World.

In the middle of the swampland of central Florida, a world of glowing fauna, colorful creatures and floating islands exists in part because of Georgia Southern graduate Aaron Clay (’11) who  helped bring Pandora — The World of Avatar to life at Walt Disney World in Orlando.

Clay, a mechanical engineering graduate, began his career there as an intern in the Disney College Program, where he served as an attractions host and later became a supervisor in that area. He eventually landed an engineering internship with Engineering Services at Disney’s Hollywood Studios, and later transferred to the Quality Engineering Department, where he now works full-time as an associate quality engineer.

His newfound position gave him the opportunity to work on one of Disney’s newest and most advanced park attractions, Pandora.

“Pandora is truly another world, featuring both undeniable beauty and wonder with many surprises to discover,” he said. “While the land is a sight to see in the daytime, it really comes alive at night. I don’t want to give away any spoilers.”

Working on the project was highly collaborative, he said.

“Our team partnered with several departments, such as Imagineering, Ride and Show engineering, Sustaining engineering, Engineering Services, Operations and Quality Assurance. Communication was key on this project, as it took the combined efforts of everyone working together around the clock to deliver this project on time with no delays.”

He describes the experience of watching the park come to life as “nothing short of spectacular.”

“The challenge of creating a fictional place in a real world setting was a daunting task,” said Clay. “However, I think the incredible talents of all the teams on the project managed to pull it off.

“One of the biggest obstacles when opening Pandora was the floating mountains. A project of this scale had never been done before,” he continued. “Suspending both rock work and free-hanging vines over guest’s heads would be a challenge to both inspect and maintain. Our team worked diligently with our inspectors to ensure reasonable plans would be in place in order to maintain the mountains over time.”

On the park’s opening day, Clay and his team members anxiously awaited responses from guests.

“On the first day we opened the land to the public, a few members of my team waited at the exit to the signature attraction, Flight of Passage,” he said. “The overwhelming positive responses we listened to from our guests made the whole project worthwhile. Seeing families and children so enthralled and impressed with our attractions and experiences make every bit of what I do so rewarding.”

Aside from working on attractions throughout Disney, Clay works with a team that ensures all the registered attractions are in full compliance with the industry standards, helping keep attractions safe for guests and cast members.

“While our team sustains the current existing attractions, we also work closely with new projects, ensuring that the project meets all requirements throughout the stages of planning, construction and turnover,” he said, adding he’ll soon have the opportunity to work projects such as the recently announced Toy Story Land and Star Wars Land.

In addition to Pandora, Clay also has helped open Frozen Ever After, a attraction themed to the Disney animated hit, “Frozen.”

“The ride blends seamlessly into the Norway pavilion over at Epcot,” he said. “I have also worked on expanding some of our more popular attractions, such as Soarin’ Around the World, and Toy Story Mania! in order to accommodate more guests,” he said.

And while working with world-class attractions at Disney is a dream come true, Clay credits his time and experiences as a student at Georgia Southern for helping him reach his career goals.

“Both my education and time with Georgia Southern engineering groups, such as Formula SAE, helped set me up for success with this project,” he said. “The content learned from the mechanical engineering program is continuously used for new and current attractions for both design and sustainment of safety systems. While working on the Formula SAE team, I was able to gain many leadership skills in an engineering setting, such as communication, trust, inclusion and coaching.”