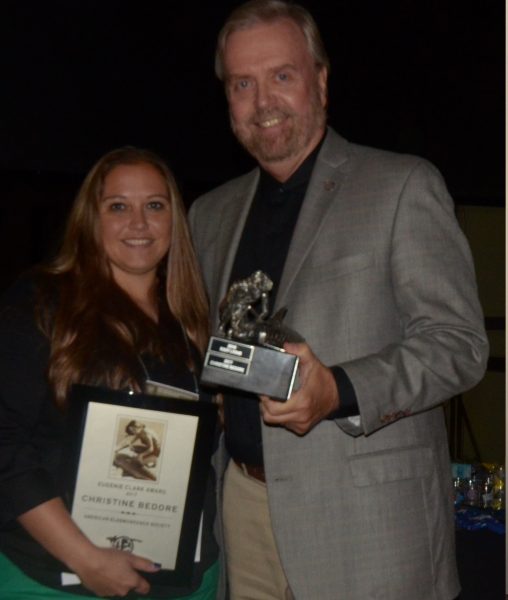 Christine Bedore, Ph.D., is pictured holding her award with Director of the Center for Shark Research at Mote Marine Laboratory, Bob Heuter, Ph.D.

Georgia Southern graduate students and faculty were invited to present research at the American Elasmobranch Society (AES) annual meeting in Austin, Texas, in July, and some took home awards. The AES meeting is a national scientific conference that is hosted as part of the annual Joint Meeting of Ichthyologists and Herpetologists (JMIH).

Matt Scanlon gave a talk in the AES conservation session about his work on shark interactions with Georgia’s commercial shrimp fleet. Brianna Hall presented a poster as part of the Physiological Ecology Symposium about cownose ray brain warming. Ricky Orton, recent M.S. graduate and student from Lance McBrayer’s, Ph.D., lab, gave a talk about his work on lizard sexually dimorphic coloration, and presented a poster on gene flow in the Florida scrub lizard, both as part of the reptile ecology and behavior sections of the JMIH.

Graduate student Theresa Gunn was also selected to speak about her work on stingray color change as part of the AES’s symposium titled “Applications of Physiological Ecology in Elasmobranch Research.” Gunn took home a $1,000 Mollet Research Award for her research proposal.

The students attended the conference with the help of Assistant Professor of biology, Christine Bedore, Ph.D., who has been bringing her students to the annual AES meeting every year since she started her career at Georgia Southern in 2015.

“For nearly any elasmobranch biologist, Dr. Eugenie Clark has served as a source of inspiration at some point in their career,” Bedore said. “…Genie’s ground-breaking work on shark behavior, along with her charming personality, really helped make it possible for our field of elasmobranch biology to be where it is today. To be recognized as ‘the next Genie Clark’ is an amazing honor, and to be presented the award by my long-time mentor Dr. Bob Hueter made this award even more special.”

Bedore has been studying sharks and rays for more than 10 years. In that time, she’s published several research papers on elasmobranch sensory systems, engaged with the general public through outreach events, and participated in both laboratory and field-based research with sharks and rays. She currently has an active research lab at the University with four graduate students and two undergraduate honors students who are studying sensory biology and conservation of sharks and rays.

Any undergraduate or graduate student interested in working on elasmobranchs can join the AES as a student member. Students in at least their second year of membership who are conducting research on sharks, skates or rays can submit research proposals and be considered for one of these awards. The AES also offers travel awards for students traveling to the meeting to present their research. For more information regarding membership and awards, visit www.elasmo.org.