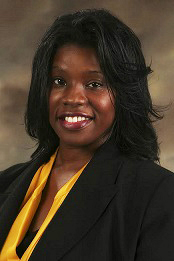 Angelita Scott, Ph.D., assistant professor in the College of Health and Human Sciences at Georgia Southern University, has been selected as a 2017 American Society of Interior Designers (ASID) Ones to Watch Scholar.

The new ASID Ones to Watch program seeks to identify and recognize individuals who are considered rising leaders in the interior design industry. To be considered for the program, the individual has to demonstrate exceptional leadership potential and have a willingness to push boundaries within the interior design profession. Seventeen Ones to Watch award winners were selected from 129 nationwide applicants. Of those 17, Scott was one of eight Ones to Watch Scholars selected.

“I am proud to be a member of an organization that recognizes the importance and value of diversity in leadership positions,” Scott said. “Creating a program to support leadership of individuals in underrepresented groups expressly shows they are committed to equality in the workplace and the profession of interior design.

“I am especially honored to be one of the scholars for the inaugural Ones to Watch program,” she continued. “To be among the eight scholars is extremely humbling and exciting.”

To be eligible for the program, a person must be actively employed in the interior design industry, have five to 15 years industry experience, be employed by a firm with at least 25 employees, be on a path to a senior and/or executive-level position in the interior design industry, be part of an underrepresented group in industry management roles including women, members of racial and ethnic minority groups, LGBTQ, and person with disabilities, and be fully committed to participate in the Ones to Watch scholars program if selected.

In addition to meeting the set of eligibility requirements, applicants had to submit a letter of recommendation, an essay on leadership, an essay on their impact in the interior design profession, a curriculum vitae and a teaching portfolio.

“Being in a position to have a seat at the table with national and international leaders in interior design and related professions is truly a gift,” Scott said. “In addition to my personal growth, I am so proud to represent and bring further notoriety to Georgia Southern University.”