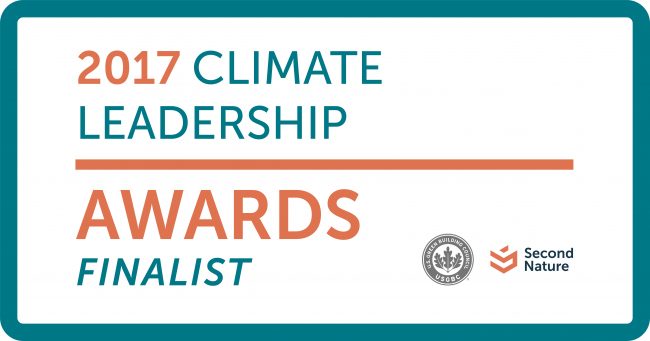 Georgia Southern University has been named a finalist for the 2017 Climate Leadership Awards by Second Nature.

“It is a tremendous honor and great accomplishment for Georgia Southern to be named a part of this very selective group,” said Lissa Leege, Ph.D., director for the Center for Sustainability. “This recognition will serve to further energize our pursuit of sustainability and to broaden our influence as we model sustainability for our students as future leaders.

Former University President Bruce Grube signed the Climate Commitment in 2007 for Georgia Southern, paving the way for the University’s national recognition since then.

Leege believes Georgia Southern was selected as a finalist in part because of the strong commitment students have to sustainability across campus.

“All Georgia Southern students take an Environmental Science course, and the student-initiated sustainability fee supports innovative sustainability advances on campus,” she said. “We are one of the state’s top participants in Georgia Power’s Commercial Energy Efficiency Rebate Program. We irrigate with a cutting-edge reuse water system, and we are ranked No. 1 nationally for the number of passengers on our buses per mile.”

The winning institutions will be announced in September, and the Awards ceremony will take place at the Greenbuild Leadership Awards Luncheon in Boston on Nov. 9. Winners will receive national recognition for the award, and winners and finalists will be listed permanently on the Second Nature Climate Leadership webpage.

Second Nature works to proactively build a sustainable and positive global future through initiating bold commitments, scaling successful actions, and accelerating innovative solutions among leadership networks in higher education. The Climate Leadership Commitments are a signature program of Second Nature and include a Carbon Commitment (focused on reducing greenhouse gas emissions), a Resilience Commitment (focused on climate adaptation and building community capacity), and a Climate Commitment that integrates both. The Climate Leadership Network comprises more than 600 colleges and universities in every state and the District of Columbia who have committed to take action on climate and prepare students through research and education to solve the challenges of the 21st century. Learn more at: secondnature.org.