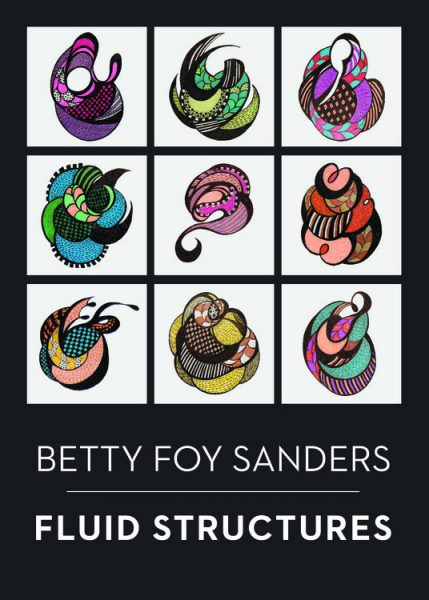 After spending more than half a century making art, Betty Foy Sanders will present her final exhibition this fall at Georgia Southern University.

As part of the Betty Foy Sanders Georgia Artists Collection 50th Anniversary events, the exhibition, “Fluid Structures,” will be presented at the Center for Art & Theatre’s University Gallery from Sept. 28 – Oct. 13. It will be on view during the Georgia Artists Collection 50th Anniversary Celebration, a special event, beginning at 5 p.m. on Thursday, Sept. 28.

“‘Fluid Structures’ would be a top-tier exhibition under any circumstances, but the fact that it marks the culmination of a love of art-making that dates back to the mid-century, post-war era makes this fresh and exciting exhibition all the more impressive,” says Gallery Director Jason Hoelscher. “The suite of drawings, or Doodles, as Mrs. Sanders calls them, looks as contemporary as anything on exhibit at the most contemporary galleries, anywhere. This recent body of drawings, combined with a selection of other recent paintings and mixed media works, makes this is a must-see show by one of the Southeast’s most vibrant artists.”

At age 91, the 74th first lady of Georgia (1963-67) has never stopped looking for ways to challenge her artistic skills. From watercolors to oils, to ink, rocks and minerals, her work spans a range of mediums and reflects a variety of influences. While “Fluid Structures” will focus on her newest body of work, work from each of her eras–including Native American, Wildflowers and Rocks & Minerals–will be highlighted in the Georgia Artists Collection 50th Anniversary Exhibition.

Sanders has a deep love of art and her home state, which has driven her work both in and out of the studio. In her own artwork, Sanders has explored Georgia’s flora and fauna, geology, history and coastal regions. During her time as first lady, she and her late husband, Gov. Carl Sanders, contributed greatly to arts programs across the state, creating the Georgia Council for the Arts and Humanities, establishing community arts organizations, and building arts facilities for public institutions, such as Georgia Southern’s Foy Fine Arts Building, named for her father. Sanders is the founder and curator of Georgia Southern’s Betty Foy Sanders Georgia Artists Collection, which celebrates notable artists across the state and will mark its 50th anniversary this year. She and Gov. Sanders have given generously to the University’s Art Department, which is named in her honor.

For more information about the Georgia Artists Collection, please visit GeorgiaSouthern.edu/CAT. To RSVP to the special 50th Anniversary event on Sept. 28, please contact cstoddard@georgiasouthern.edu or (912) 478-6667.