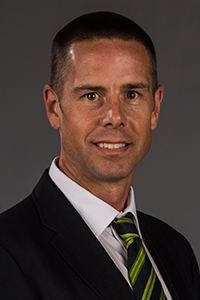 For Chad Asplund, M.D., medical director of sport medicine at Georgia Southern University, life is all about the mission. Whether he’s aiming to complete a triathlon, heal a wounded athlete or save a dying soldier, Asplund will do whatever it takes to see his mission through to the end.

A veteran of the Coast Guard and Army and now a flight surgeon in the Air National Guard, Asplund has spent his entire adult life serving others.

“I often say this is my third life,” he laughed. “I have my coast guard life, my army life, and now my post-army life. I’m still staying busy.”

Asplund grew up as a military brat, moving around the northeast throughout his youth. He served in the Coast Guard for five years while attending the U.S. Coast Guard Academy in Connecticut as a biological oceanography major. After his rotations on a ship out of New York, and then as a staff officer in Washington D.C., however, he switched gears and decided to delve into the realm of family medicine.

He moved on to the University of Pittsburgh on a full Army scholarship and added sports medicine courses to his medical degree. Eventually his love for sports, his passion for helping others and his focus on goals culminated into his successful career in sports medicine.

“One of the things you learn about in the Army is it’s all about the mission,” he said. “A lot of what I learned through the military, from perseverance through mental and physical hardships and a focus on the goal, lends itself really well to sports and sports medicine, as well as in life in general.”

During his time in the Army, Asplund practiced full service family medicine, including delivering babies, for seven years. He deployed to Afghanistan in 2005 and took care of many soldiers, including those featured in the film Lone Survivor. As a flight surgeon, Asplund now serves in the Georgia Air National Guard as the primary physician for military aviation personnel on special duty status.

While it seems like living up to Asplund’s success might be overwhelming, he insists it’s all about discipline, attitude and staying motivated.

“Having success in life is a lot like success in sport. It’s all about setting goals,” he said.  “In training for sport, I really enjoy the process. You start when you’re not in real great shape, you go through the process and see your fitness improve, achieve your goal and start all over again. The challenge, attaining goals along the way.”

And Asplund is never one to shy away from a challenge.

“I ran competitively cross country and track in high school and college and did marathon racing after college,” he said. “In Afghanistan there wasn’t a whole lot to do there except work and exercise, so I rode a bike for an hour and ran for an hour. When I saw the Ironman Triathlon on TV over there, 75-year-old guys, guys with one leg, and people like that competing I thought, ‘If they can do that, so can I.’”

While maintaining his career, family-life with his wife and two sons, and working in the healthcare field, Asplund has finished one full length Ironman Triathlon and several other long distance triathlon.

“My advice is to not overlook the small things you have to do to succeed,” he said. “Put in the work, and the results will come.”

“My favorite part of this job is having the ability to help students get better so they can reach their goals,” he said.

“It’s really tremendous that the University thought enough about the students to put the resources in to really create a state-of-the-art health facility,” he said. “I’ve been in medicine for 17 years now, and this is the first building I’ve ever worked in that was completely designed for clinical care. I’m excited to have the opportunity to get back into the women’s clinic and to bring some additional level of service to the students.”

And as for football season?

“One thing I can say about Georgia Southern is I am really impressed by how much the university rallies around the Eagles. I can’t wait to see what this season has in store,” he said.