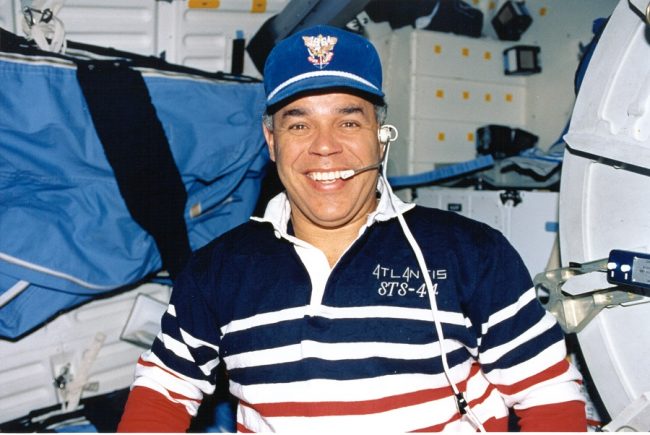 His presentation, titled, “An Astronaut’s View of Choices, Influences, Contributions and Other Stuff Later Discovered,” will discuss his stellar career and the concept of choices in life. The lecture is free and open to the public.

“Looking down from space at our beautiful home…Earth…one wonders what choices had been offered and taken, what goals were considered, evaluated and selected, what influences shaped your path, and what molded the character that you had become,” said Gregory. “My life offers many choices. Each choice taken, or not taken, has a profound affect on where you are right now.

After graduating from the United States Air Force Academy in 1964, Gregory entered pilot training and attended undergraduate helicopter training at Stead Air Force Base in Nevada. He then served as a helicopter rescue pilot, a combat rescue pilot in Vietnam, a missile support helicopter pilot and a fixed-wing pilot. He later attended the United States Naval Test Pilot School and served as an operational test pilot. In 1974 he was detailed to the NASA Langley Research Center where he served as a research test pilot for several years.

Gregory was selected as an astronaut in 1978 and served several rotations in space through the Kennedy Space Center in Florida. His first assignment was as pilot of the space shuttle Challenger followed soon after by the Discovery. He has logged more than 6,976 hours flying time in more than 50 types of aircraft — including 550 combat missions in Vietnam.

Gregory serves on the Board of Directors for the Young Astronaut Council, the Challenge Center for Space Science Education and the Virginia Air and Space Center-Hampton Roads History Center.

Among his many honors, Gregory holds the Defense Superior Service Medal, the Legion of Merit, the National Intelligence Medal of Achievement, two Distinguished Flying Crosses, 16 Air Medals and the NASA Distinguished Service Medal.

To learn more about Gregory and his accomplishments, visit https://www.jsc.nasa.gov/Bios/htmlbios/gregory-fd.html.