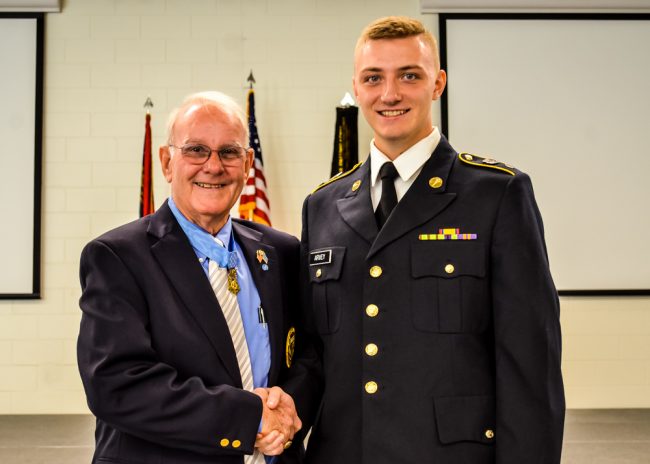 On Friday, Sept. 22, Cadet James Arvey, was awarded the prestigious Armed Forces Communications and Electronics Association Medal of Honor ROTC $5,000 scholarship to help him pursue his career with the Army’s cyber branch and recognized for his outstanding efforts in the field.

Arvey, an information technology major with a 3.9 GPA and a perfect score on his Army Physical Fitness Test, walked across the stage in the University’s new Military Science building, to receive his recognition. In addition to the scholarship, Vietnam veteran and Congressional Medal of Honor recipient, Command Sgt. Maj. (Ret.) Robert Patterson, presented Arvey with a certificate, Medal of Honor coin and Medal of Honor book during the ceremony.

“Cadet James Arvey is one of the best Cadets, not only in the Eagle Battalion, but in the country,” said Lt. Col. Curtis Perkins, professor of military science. “He was also recently recognized as a Distinguished Military Graduate, ranking him in the top 10 percent of Army ROTC seniors nationwide…We are extremely proud of Cadet Arvey’s accomplishments.  He is an outstanding leader, highly intelligent and a great example for Cadets in our program.”

Cyber branch is a new branch for Army officers, and only a select few are chosen to participate across the nation (30 officers comprised of 15 West Point graduates and 15 ROTC graduates nationwide). The first graduating Cyber class took place May 2016 and included University alumnus, former ROTC Cadet and honor graduate, Lt. Jesse Newsome.

Not only is Arvey attending Georgia Southern on an ROTC scholarship and HOPE scholarship, but he also is part of the University’s award-winning Ranger Challenge Team and a cyber internship graduate. Arvey hopes to follow in the footsteps of his brother, alumni Charles Arvey (17’) to become a cyber officer for the military.