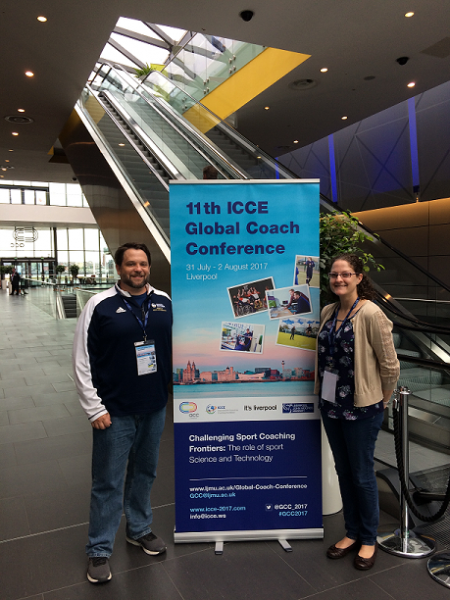 The Conference aimed to showcase and evaluate the importance impact-sport coaching plays globally within all levels of sport and society. Attendees participated in lectures, practical sessions, discussions and demonstrations.

Wilson and Langdon were selected by a peer-reviewed submission process to present their research, titled “One and Done: Coach Specialization in the Georgia High School Association, 1965-2015,” which highlighted the statewide trend in sport coaches specializing one sport, along with factors that influenced that specialization.

“In recent years, there has been a lot of attention given to the physical, mental and emotional ills of ‘athlete specialization,’ or playing only one sport year round,” said Wilson. “However, there was no known research on coach specialization, despite anecdotal evidence that high school coaches were coaching fewer sports than in previous generations. For example, I was a high school teacher and coach for 12 years prior to entering higher education who witnessed and experienced both athlete and coach specialization many times.”

This realization inspired Wilson and Langdon to work through the Georgia High School Association (GHSA), the largest governing body in Georgia made up of more than 450 schools,  to examine their archives of coach directories dating back to 1965. They analyzed more than 19,000 coaches from 1965, 1990 and 2015 to look for specific patterns. They also statistically examined variables that might impact coach specialization including school size, locale, type of sport, gender coached and whether the coach was a head coach or not.

They established a clear pattern of increasing coach specialization in GHSA, despite having fewer coaches per school.

“Participating in this conference allowed us to showcase our program and this groundbreaking research to leaders in coach education and coach development from around the world,” said Wilson. “This research taps into an important, but overlooked, aspect of the high school sporting experience. Future research will examine what impact coach specialization has on the coach and athlete experience.”