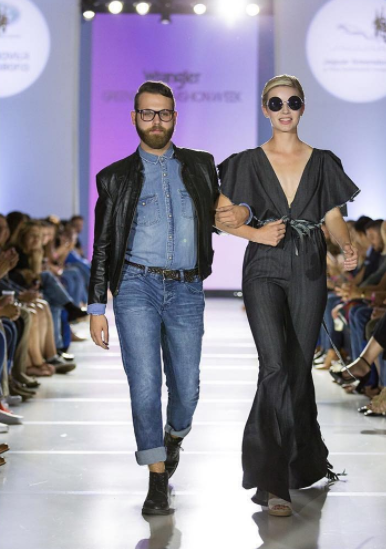 Senior fashion merchandising and apparel design (FMAD) student Kyler Arnold has had an eye for fashion and a love of design since before he can recall. So when he entered the Wrangler Competition at Greensboro Fashion Week in September, it was no surprise that his passion earned him an apprenticeship with the global denim company.

Greensboro Fashion Week is an annual event showcasing the glamour, style and talent presented in the surrounding area. Arnold, a Jacksonville, Florida native, was one of 11 designers chosen out of 50 applicants from around the country to compete.

During the competition, designers were asked to showcase an original design created with 10 yards of raw denim provided by Wrangler. Designers each drew a card labeled with a certain decade from which they had to draw inspiration.

“Designers were told to create designs that were a fusion of their personal design aesthetic and trend from the corresponding decade of Wrangler fashion,” said Arnold. “I pulled the 1970’s and created a flared leg jumpsuit with a front zipper.”

The designs were judged based on the parameters of cut, fit, use of material, innovation and resemblance to the decade. Arnold was announced as the winner by a member of the Wrangler design team.

“I was honestly shocked to receive the award because there were a lot of great looks on the runway that night,” he said. “I went into it thinking my jumpsuit was nothing more than a well-made garment and left feeling validated and reassured that this is exactly what I should be doing with my life.”

To others, Arnold’s win is not so surprising. FMAD instructor Hope Wallace Simpara, worked with Arnold on various projects like a Night of Spectacles and Arts of Fashion, and mentored Arnold with his Wrangler entry.

“Kyler is an exemplary student,” said Simpara. “He has tremendous work ethic and works pretty much independently on most projects. I have mentored him on a few fashion competitions. His aesthetic approach to design is using reclaimed and repurposed textiles. He has overcome many personal struggles and has used design as a sort of therapeutic outlet. He is extremely talented and has had lots of success so far as a student designer with undergraduate research at national conferences and national and international competitions.”

Arnold attributes much of his success to the opportunities at Georgia Southern.

“The fashion program here has some pretty neat perks,” he said. “The professors are very informed and helpful. Our new machinery is very professional and allows our instructors the ability to get information across effectively, push us to experiment and learn industry standard tactics. I think the most rewarding aspect of the program is that it is so small. Due to this, it’s almost as if each professor gives you a small piece of them by the time you become a senior. You’re still you. In fact, you’re more you than you were when you began the program, but now you leave as a fusion of many skills, ideas, ways of thinking, etc. that you never would have gotten otherwise.

It was a no brainier when making a decision as to what to study here. I’m just very thankful programs like FMAD at Georgia Southern exist at public universities.”