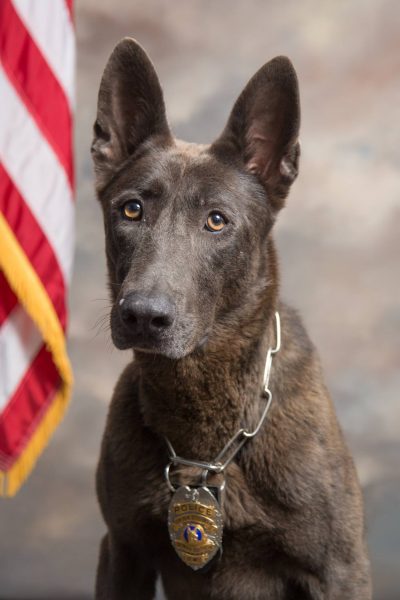 In the coming weeks when Deimos, Georgia Southern University Police Department’s Dutch Shepherd K-9, sniffs around Hanner Fieldhouse or searches through Allen E. Paulson Stadium, he’ll be clad with a bullet and stab protective vest thanks to a charitable donation from the nonprofit organization Vested Interest in K9s Inc.

The vest, sponsored by an anonymous donation to the organization, will be embroidered with the sentiment “In memory of K-9 Addi,” in honor of the donor’s fallen K-9.

Deimos, the first canine on Georgia Southern’s Police force, primarily works with Officer Erk McCurdy, who has worked as a K-9 handler for more than 15 years. Deimos is trained to detect more than 15 kinds of dangerous or illegal scents, and he is on-call for every major University event, guest speaker and athletic game.

“Deimos can track scents and find things in moments that would take a crew of men to find,” said McCurdy. “He’s a star on the team and a companion at home. He loves being with his sister, Enyo, at home, and being on duty at work.”

Deimos is truly part of the Eagle Nation family, and his protection is a top priority for his fellow law enforcers. Each protective K-9 vest requires a donation of $950, a sum that McCurdy says most departments simply can’t afford on their own.

“You never know when something may happen where the vest may come in handy,” said McCurdy. “We’re so thankful for this donation so that we may keep Deimos safe and part of our team for the long run.”

For more information on the Vested Interest program at Georgia Southern, contact Officer McCurdy at (912) 478-5234. 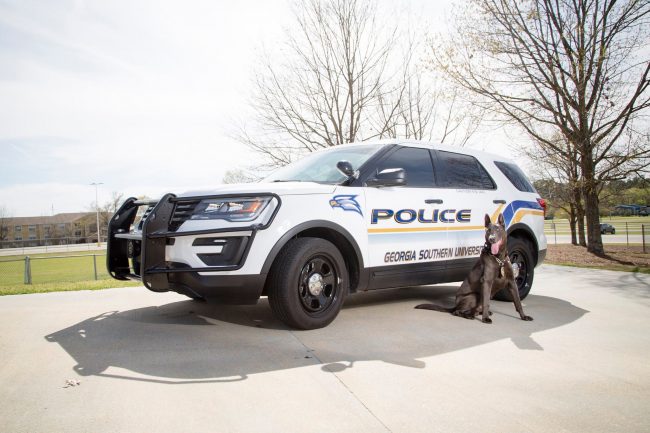