Connecting us to the past: Georgia Southern anthropologists bridge gap between past, present Native people 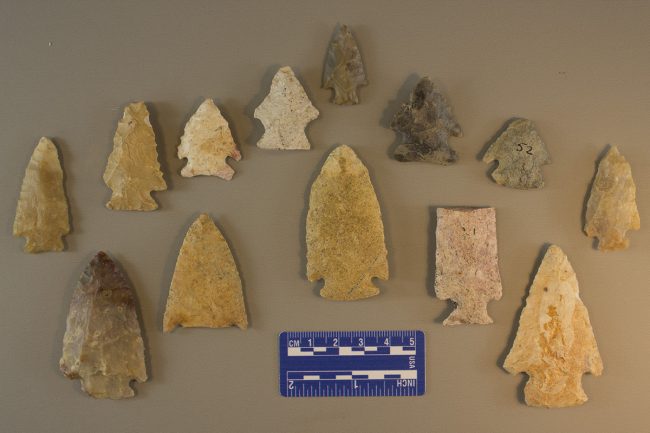 (Photo by: Scott Clark) Georgia Southern is home to these Kirk regional corner-notched points dated in the range of 10,000 – 8,000 years ago.

What can we learn about practices of Native people thousands of years ago and connect it to our culture today? Georgia Southern anthropologists seem to think quite a bit.

From early agricultural practices to eating habits and social gatherings, research by professors at Georgia Southern shows many connections to present day. Studying historical artifacts like pottery, animal bones and even petrified seeds can help anthropologists tell the story of these connections.

“As anthropologists, we’re fascinated by these artifacts, but beyond that, one of the ultimate goals we serve is to help tell about that patchwork and fabric of humanity all around the world,” said Jared Wood, Ph.D., assistant professor of anthropology at Georgia Southern.

Telling the story of Native peoples from an anthropological perspective is important because it provides scientific insight to life hundreds or thousands of years ago, Wood noted. It is also important to remember the cultural perspective, especially with Native American history, because there are many descendants still alive today.

Pointing to preserved arrowhead points, Wood said, “If you asked me what these points tell about these peoples, I’d have a scientific story for you that talks about quarrying of resources, using these to hunt game or technologically as knives or scrapers. As anthropologists these are among the stories we tell.

“But if you asked a Native person, ‘What does this mean to you?’ they could give a story about the meaningfulness of materials they made and used, and how it tied into the complex structure of their culture,” he continued. “Both of these stories would be true … it is just different ways of looking at human behavior.”

“What we do as anthropologists, is look at what makes humans the same, and also what separates us,” Altman said. “We are trying to figure out the connectedness between then and today so we see social structures and cultural features that were present then and today. It helps people relate to the past.”

Altman has helped connect past and present Native American generations in a number of ways, most notably by helping communities who are working to preserve the Native language of the Cherokee Nation in North Carolina and Oklahoma. A small percentage of Native speakers are still alive today, she said.

“For about 10 years, I worked on helping them develop community programming to revitalize the language,” said Altman. “We started an immersion school, made community programs for elders and speakers, and began a whole process of culture of linguistic revitalization that is long and complicated.”

Archaeological Curator, Matthew Compton, Ph.D., who specializes in zooarchaeology, the study of animal remains, has studied the contents of pits from Native American archaeological sites. He said researchers have found animal remains, charred seeds, sherds of pottery and other artifacts at Hartford, an archaeological site in Pulaski County, Georgia. These artifacts, thousands of which are stored at Georgia Southern’s R M Bogan Archaeological Repository, tell a lot about the daily lives of Native Americans who inhabited the site and even how the inhabitants interacted with other groups in different regions of the state.

Compton said researchers have collected items like deer antlers that not only indicate Native Americans were hunting and eating deer, but also what time of year the deer were harvested. Additional findings like catfish, bass, duck, and squirrel bones, as well as charred acorns, persimmon seeds and hickory nuts show they relied on a diverse array of plants and animals for their diet.

One very interesting find, Compton said, was a tooth from a black drum.

“The black drum is a coastal fish, and this site is just south of Macon [Georgia], so this tooth is from a fish that doesn’t live around that area,” Compton said. “Just like our evidence from the pottery that shows interactions between groups from different areas, this shows an interaction with the coast either through trade or travel.”

“I think people have a real misconception that Native peoples were simple and they weren’t very advanced, but they’re just as intelligent and complex and adaptive as people anywhere in the world,” said Wood. 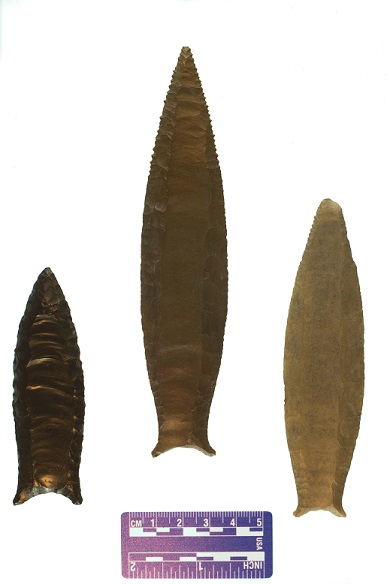 (Photo by: Scott Clark) Georgia Southern is home to these Cumberland regional points dated in the range of 11,000 – 10,500 years ago.

The best way to avoid these misconceptions, according to Wood, is to continue to study and learn. He says south Georgia is the perfect place to do so.

“I stayed in the southeast for a reason,” said Wood. “We have access to so many sites, surveys and opportunities that I will die happily never having gone to all of the places in south Georgia that I want to study. That’s a good problem to have, and a tremendous boon to our students who can actually go out and do meaningful archaeology research and contribute to larger questions of human complexity in really unknown areas.”

For more information about the Department of Anthropology and the many Native American history courses offered, visit http://class.georgiasouthern.edu/socianth/.