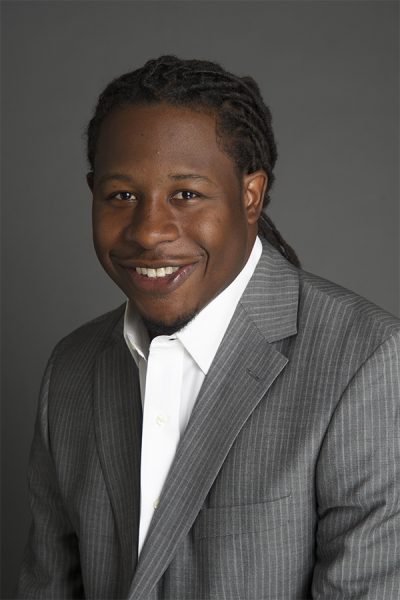 Peterson, who hails from Alachua, Florida, is a 2001 graduate of Georgia Southern and was a star athlete during his time here. Peterson led the Eagles Football team to two national titles and three championship games, and was the first sophomore to win the Walter Payton Award, which is given to the top player in the nation at the FCS level. He rushed for 100 or more yards in 48 consecutive games, is the National Collegiate Athletic Association (NCAA) Division I all-time leading rusher with 6,559 yards in regular-season contests, and at the time of graduation, he held 30 school and playoff records.

After leaving Georgia Southern, Peterson played professional football in the National Football League (NFL). He was a sixth-round draft choice of the Chicago Bears in 2002, and was a participant in Super Bowl XLI.

In addition to his outstanding athletic career, Peterson has become a champion for anyone with disabilities by publishing a book in 2012 that reveals his struggle with stuttering. “Don’t Dis My Abilities,” published by Imprint Publishing, is a story not only of Peterson’s struggles, but for anyone who is struggling to overcome challenges associated with disabilities.

Graduate and undergraduate students will be recognized during this ceremony. Due to the extremely large crowd expected, it is suggested that plans be made to arrive on campus by 11:45 a.m. or earlier. Carpooling is encouraged, and shuttles will be available beginning at 11:30 a.m. and will continue for one hour following the end of the ceremony. A parking and shuttle map, along with other commencement details, can be found at GeorgiaSouthern.edu/commencement.