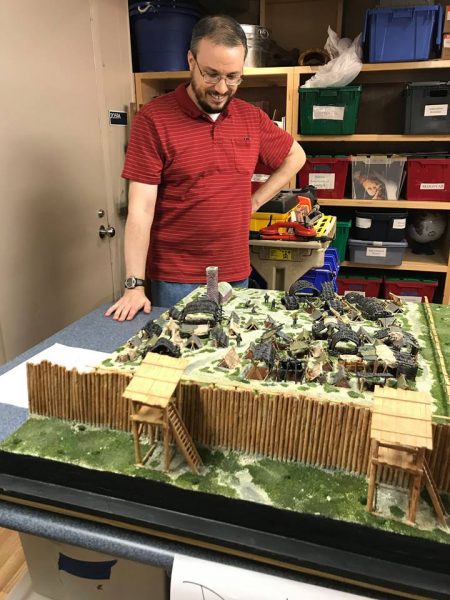 Nathan Flanders, a Fall 2017 graduate, stands with a diorama he created of Camp Lawton, a prisoner of war camp in Millen, Georgia. The diorama is on permanent display at the Georgia Southern Museum.

With an undergraduate degree in information technology and years of professional IT experience under his belt, Nathan Flanders (‘12) made the decision to return to school to pursue a master’s degree in public history, a subject for which he’s always had an interest.

He never thought he’d combine them both into a project, but after learning about digital history, which brings the two fields together, he knew he’d found the perfect fit. Flanders began working with the Portal Heritage Society (PHS) in Portal, Georgia, shortly after enrolling in graduate school as part of his master’s thesis project.

“They showed me their attempts to catalog, and they were using a table in Microsoft Word,” he said. “It was not an efficient way to catalog. I thought it was a shame they didn’t have access to a database management system, and that’s when the light bulb went off. I realized I could write one that would work as well as an expensive market version for what a small historical society would need,” Flanders said.

Combining these skills led him to create from scratch a web application that acts as an easy-to-use database and artifact catalog management system that can be used by museums or more specifically, historical societies.

“A lot of drawbacks that most local historical societies face is they work with volunteer labor, and usually those are retirees who may not have up-to-date technical experience,” he said. “So I wanted to design something as easy or easier to use as any online form or shopping checkout form.”

Flanders spent the next two years doing just that, and helped the PHS catalog items from an untouched 1950s drugstore.

“The drugstore was locked up in 1950 after the owner came down with the flu, and he passed away before he could reopen it,” Flanders said. “It was locked up until the heir of the family came back to Portal in the 1980s, and they immediately turned it over to Portal Heritage Society.”

This led to many interesting finds, including a couple of vials of Polio vaccinations and a soda fountain, complete with a mirror and stained-glass lamp, he said.

“Like most similar stores in the 1950s, this drugstore didn’t just carry medication, it was a bit of a general store,” Flanders said. “So right next to, say, a foot powder for people, you would find row upon row of lice powder for chickens. Medications for people and farm animals were on the same shelf.”

He is excited about this project because it will provide much needed and free software for the PHS to continue cataloging all the items in the drugstore, but it will also be beneficial to other historical societies and museums in the state. Flanders plans to offer a download of the management system through the Georgia Southern Department of History website.

“What I am most proud of is that I was able to make a piece of software that will perform heavy lifting for these small historical societies, but keep it simple enough not to scare anyone who might be intimidated by a more complicated market software,” Flanders said.

Michael Van Wagenen, Ph.D., associate professor and public history coordinator in the Department of History, said Flanders’ skillset and completion of this project will only help further his success.

“Digital history may be the next wave in our discipline, and Nathan has positioned himself strategically to make full use of that,” said Van Wagenen. “We are all very excited to see where this takes him professionally.”

While working on this project with the PHS, Flanders was getting even more hands-on experience by working at the Georgia Southern Museum where he learned about collections management, museum curation and even worked on a diorama of Camp Lawton for the Museum that went on permanent display.

Flanders will officially become a Double Eagle on Friday, Dec. 8, after Commencement. He said he is grateful for his experiences at Georgia Southern, which have helped steer him toward a career he is excited about.

“Working here in the Museum, and in the area of public history with public artifacts and building exhibits really showed me how much a person can enjoy their job,” Flanders said. “Every day in IT was a day at work, but here at the Museum, it’s felt a lot like play.”