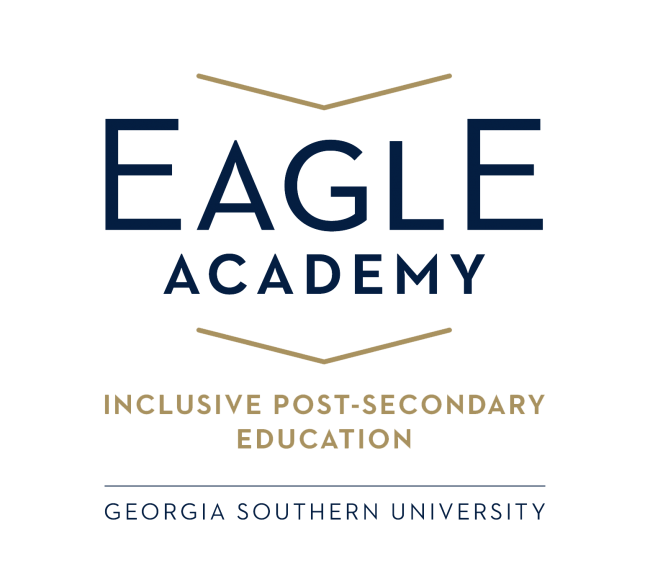 EAGLE, which stands for Equal Access to Gainful Learning and Employment, offers students a custom-built academic program based on their interests. Currently, the program includes two students, Kasey and Sharaun, who both took courses this fall at Georgia Southern related to areas in which they hope to have future careers.

“EAGLE Academy is thinking outside of the box,” explained Karen Phipps, program director for the Academy. “We create a program based on the student. This gives our students the same opportunity every other student has in this country. They can be productive members of society, but they need to be trained just like anyone else.”

As a part of the EAGLE Academy program, students also train for employment through internships or paid jobs. Kasey is working in childcare at the Statesboro First United Methodist Preschool, while Sharaun is employed with Walmart Distribution Center.

Students attending Georgia Southern through the EAGLE Academy program also have the opportunity to become fully-ingrained in campus life. Both Kasey and Sharaun live in on-campus housing where they can easily access academic buildings and campus events.

The Academy is also incorporated into the undergraduate education curriculum for special education and dual certification (early childhood and special education) degree programs. Students taking assessment courses in these majors are introduced to the EAGLE Academy teaching philosophy and process. They are also given the opportunity to volunteer to work with the Academy’s enrolled students to serve as peer coaches, academic mentors and social mentors.

“Often these students will just stop by the Academy and check in to see how the students are doing and how the program is going,” said said Shelley Woodward, the College of Education’s (COE) special education instructor and founding executive director for the Academy. “They are invested and want to see both the EAGLE Academy and our students succeed because they know how important a program like this is for students who have disabilities.”

EAGLE Academy is now the eighth IPSE program in the state of Georgia. The Georgia Southern program is unique in many aspects including that it offers the third and fourth year curriculum for students who have already completed an initial two-year program at another institution such as East Georgia State College.

Phipps and Woodward explained there are 700 graduating high school students in the state that qualify for IPSE programs.

“That’s why it is so important that we keep talking about this program and the vision we have,” said Woodward. She said the Academy began as an ‘Ah-Ha’ moment in spring 2013, has grown from a dream to a passion and now, reality.

“During a candidate visit to campus, the faculty member [from Clemson University] discussed ClemsonLIFE, and that’s when we realized that programs like this existed,” Woodward said.

At the time, Georgia only had one fully operational IPSE program located at Kennesaw State University. Woodward attended the Inclusive Higher Education Conference in fall 2013 and realized she was not going to be able to let this dream go.

“I couldn’t stop talking about it,” Woodward said. “My brain wouldn’t stop.”

The next four years were spent writing grants, visiting other IPSE programs, holding meetings and working long hours to make this program a reality alongside Phipps.

“Nothing about this has been easy,” said Woodward.

To operate, EAGLE Academy utilizes a five-year Transition and Postsecondary Programs for Students with Intellectual Disabilities (TPSID) grant it received from the U.S. Department of Education starting Oct. 1, 2015. For tuition assistance, the Academy has also partnered with the Statesboro branch of Synovus (formerly Sea Island Bank).

“We couldn’t do this without the incredible support we have had from the College of Education, especially COE Dean Koballa, Ph.D., associate dean for Undergraduate Teacher Education and Accreditation, Deborah Thomas and Department of Teaching and Learning Chair Bruce Field, Ph.D., as well as the generous financial support from our partners at Synovus,” said Woodward.

EAGLE Academy is currently taking fall-only admission applications. For the future, they hope to expand the program to include the initial first and second years for their program as well as pursue dual enrollment options. Long-term goals also include expansion to additional campuses.