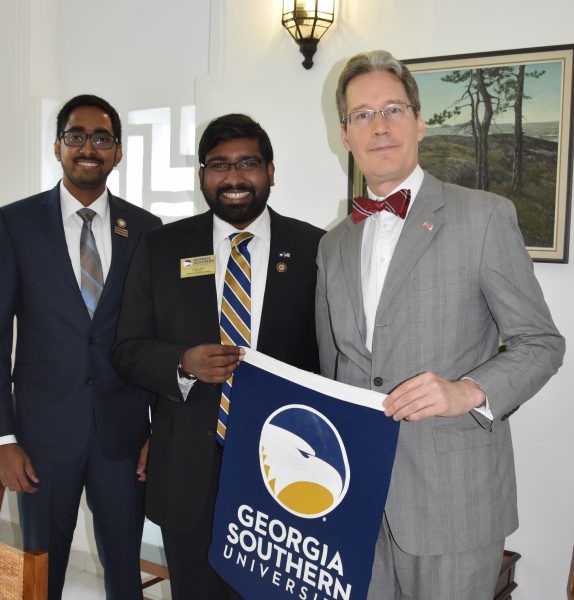 When students Dylan John and Nipuna Ambanpola met, they never imagined they would form a partnership as Student Government Association (SGA) presidents of the same university in the United States a few years later.

Despite attending rival high schools in Sri Lanka, the two are excited about the partnership they’ve formed to build a unified and strong student body across three campuses and the strides they are making to help other international students gain educational opportunities in America as they have had.

John and Ambanpola often joke of their continued friendly high school rivalry when they arrived in America and began attending different universities. John received the Georgia Rotary Student Program scholarship in 2011 and came to Statesboro to pursue his education, and in 2015, Ambanpola came to Savannah on the same scholarship.

While John had been SGA president at Georgia Southern University for two terms, Ambanpola had just been elected president of the Armstrong SGA at the start of the consolidation process.

“When consolidation was first announced, nobody knew all the answers,” said John. “We just needed everyone to shine a little bit of their light to help the process so we could navigate toward the ultimate light. We all had our own perceptions of what the institution should be.

“During this consolidation process, everything was very intentional,” he continued. “We made sure students were the predominant group we were serving and serving well.”

John and Ambanpola worked closely together in the following months, both having very open discussions with the students at both institutions. Their combined passion for creating a student body that would represent both Georgia Southern and Armstrong traditions took center stage in their many forums and town hall meetings surrounding the consolidation process.

“Some Georgia Southern students started at Armstrong and transferred here,” said John. “Some have sisters, best friends, cousins on that campus. We really are like one family in two locations, and now we’re coming together as one.”

This December, John and Ambanpola visited their hometowns in Sri Lanka and met with Robert Hilton, deputy chief of mission of the U.S. Embassy in Sri Lanka. They discussed their efforts throughout the consolidation, presented a Georgia Southern pennant to Hilton, and took the opportunity to discuss Georgia Southern as a preferred education destination for Sri Lankan and international students. They used their own stories of being two international students afforded an opportunity to lead students during such a critical period for the institution as an example of how beneficial this experience has been and can be for other students.

Both John and Ambanpola will finish out their presidency terms through May 2018, at which time one president will be elected to represent the University and its three campuses from that point on. In the next election, students will vote for the SGA president as well as two executive vice presidents who will represent each campus.

“I love the culture and our close-knit communities,” said Ambanpola. “This makes it possible for us to feel like part of a family.”