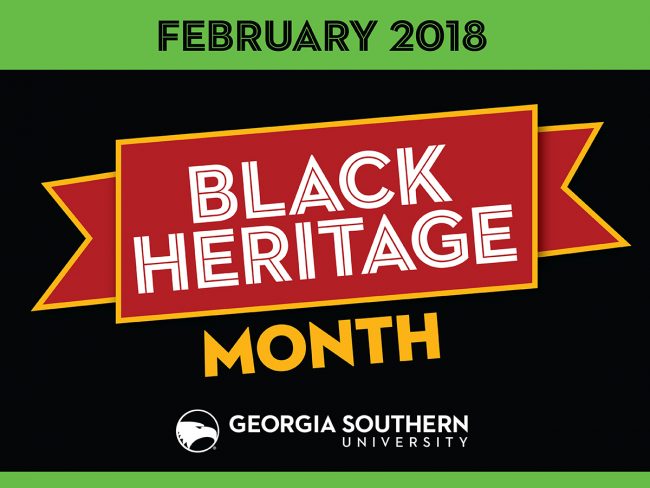 Georgia Southern University’s Office of Multicultural Affairs is pleased to announce the schedule for the 2018 Black Heritage Month celebration, featuring a series of lectures, panel discussions, performances and more.

Most events will take place on the Statesboro, Armstrong and Liberty campuses and are free and open to the public. Highlighted events include:

Celebrated civil rights activist, attorney and political commentator Bakari Sellers will serve as the speaker for this year’s Martin Luther King Jr. Celebration. In 2006, he became the youngest African-American elected official in the country and went on to win the 2014 Democratic nomination for Lt. Governor in South Carolina. A regular contributor to CNN, Sellers was named to TIME magazine’s “40 Under 40” list in 2010 and ranked in “The Root 100” list of the nation’s most influential African-Americans in 2014.

“Selma” chronicles the tumultuous three-month period in 1965 when Dr. Martin Luther King Jr. led a dangerous campaign to secure equal voting rights in the face of violent opposition. The epic march from Selma to Montgomery culminated in President Lyndon Johnson signing the Voting Rights Act of 1965, one of the most significant victories for the civil rights movement. This film tells the real story of how the revered leader and visionary, along with his brothers and sisters in the movement, prompted change that forever altered history.

In correlation to Colin Kaepernick’s issues, engage in a panel discussion on how athletic teams are affected by kneeling during the National Anthem.

Facilitated by Assistant Professor of Music Russell Brown, Ph.D., this lecture will dive into understanding the history and influences of urban music in American culture.

Following the string of shootings of unarmed black men, the Charleston 9 and the removal of the confederate flag from the South Carolina State House, poets and authors Al Black and Len Lawson united in an effort to address race in America. Together, they hold poetry readings and open forums on race and diversity to engage audiences in tough conversations that can change communities in the South.

Join Georgia Southern for a night of music, food and fun as the Black Heritage Month celebration continues with a revival of the “Golden Age of Harlem” and its lasting influence of jazz music and culture.

The United States has had a qualified black man leading the nation as president. This proves that race doesn’t matter and that we live in a post-racial America—or does it? Is the status of a post-racial America a fact or a myth? Join Criminal Justice Professor Maxine Bryant, Ph.D., in a humorous, yet thought-provoking discussion on this controversial phenomena.

Step Afrika! was founded in 1994 as the first professional company dedicated to the tradition of stepping and now ranks as one of the top 10 African-American dance companies in the U.S. The company blends percussive dance styles practiced by historically African-American fraternities and sororities, African traditional dance and influences from a variety of other dance and art forms, integrating songs, storytelling, humor and audience participation.

For more information on the 2018 Black Heritage Month celebration, please contact the Office of Multicultural Affairs at msc@georgiasouuthern.edu or 912-478-5409.