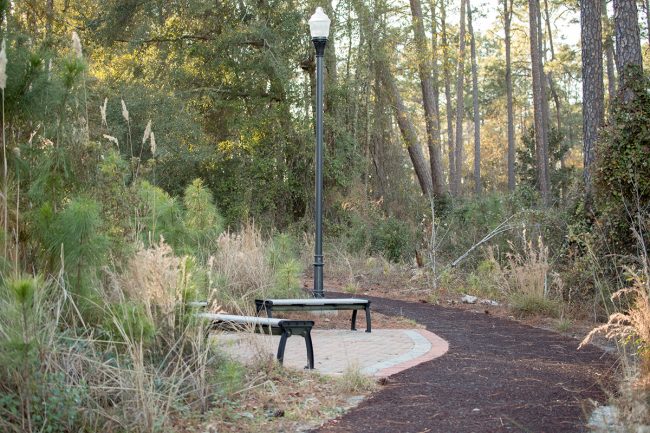 Georgia Southern University and the Statesboro community will soon be able to access campus and the Blue Mile, Statesboro’s downtown revitalization project, via a new walking trail scheduled for completion in early February.

This new rubberized trail is an extension of an existing concrete trail that winds through the Herty Pines Nature Preserve and goes around J.I. Clements Stadium and the Softball Complex. The new trail will cross Beautiful Eagle Creek and tie into an existing sidewalk on Tillman Road and connect to the Blue Mile Corridor on Highway 301.

“The trail includes lighting, and also fencing along the Georgia Southern Athletics practice fields,” said Matthew Shingler, director of Facilities Planning, Design and Construction at Georgia Southern. “There are a lot of faculty, staff, students and Statesboro community members who are joggers and walkers, so we hope this provides an avenue to improve the tie between the city and University.”

The Blue Mile is a project aimed at upgrading and enhancing the South Main Street corridor of Highway 301 and encouraging private redevelopment of outmoded, highway-oriented commercial development into pedestrian friendly, mixed-use centers. The Blue Mile Committee is a grassroots organization made up of community leaders, volunteers and organizations.

Keely Fennell, president of the Blue Mile Foundation, which helps revitalize neighborhoods along the corridor, believes it will benefit the community as a whole.

“Georgia Southern was very generous in creating this trail that connects to the current trail,” she said. “It creates a walkway or easier access for students to come downtown, and hopefully it will encourage students to walk to the Blue Mile, and to eat and shop on the street.”

Fennell said the Blue Mile Foundation and Committee are grateful to the University for supporting the revitalization efforts of the Blue Mile and downtown area and for funding the new trail.

“Georgia Southern has been very instrumental in the entire Blue Mile endeavor and has encouraged economic development in our community,” she said.

The walking trail project began in the winter of 2017, Shingler said, and is scheduled for final completion by Feb. 2.