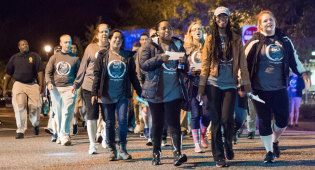 According to Rape, Abuse and Incest National Network, every 98 seconds an American is sexually assaulted.

“For this reason, colleges have the responsibility to provide space for community members to openly dialogue about sexual violence which includes stalking, relationship violence and other forms of sexual aggression,” said Georgia Southern Armstrong Campus Counseling Center Director Jeanne McGowan, LCSW. “Awareness events are a great platform to reflect on one’s own knowledge, thoughts, feelings and attitude about these issues. Promoting a culture of safety as well as equality and respect is vital to support the mission of the college.”

The following events will continue during the month of April in Savannah and Statesboro:

“What Were You Wearing?” is an exhibition that tackles the pervasive myth of rape culture that insinuates a victim’s attire is partly responsible for an attack. On display will be outfits recreated based on statements from student survivors and their accompanying stories. The event is co-sponsored by the Rape Crisis Center of the Coastal Empire (RCC) and Georgia Southern’s Counseling Center and Peers Educating Peers (PEP). Given the sensitive subject matter, counselors and resources will be on hand.

Walk A Mile In Her Shoes
A unique event that helps earn support from men and boys to avert sexual violence, and bring awareness to the struggles female victims of sexual assault and harassment face.

Thursday, April 5 |  5:30-7:30 p.m.
Forsyth Park – Savannah
The University Counseling Center will sponsor a team for this annual event in downtown Savannah, which benefits the RCC. For more information click here.

Take Back The Night
Tuesday, April 10 | 7 p.m.
Student Union Plaza Fountain (Armstrong Campus)
The Georgia Southern community will unite for a “Take Back the Night” rally, an event dedicated to raising awareness about sexual assault and intimate partner violence, in which participants will take part in a silent march in the International Garden. The event is sponsored by the Counseling Center, PEP, Health Services, Health Promotion, Resident Assistants Council, Student Government Association and Zeta Phi Beta.

Denim Day
Wednesday, April 25
Georgia Southern will join Peace Over Violence, a nonprofit, anti-violence activist organization, for its annual Denim Day campaign, which falls on a Wednesday each April.

The campaign was created 19 years ago after an overturned rape conviction by Italian Supreme Court justices, who blamed a victim for wearing tight jeans. Since then, wearing jeans on Denim Day has become a symbol of protest against misconceptions about sexual assault.

Students, faculty and staff can purchase Georgia Southern Denim Day T-shirts and wear them on April 25 to protest sexual violence.

Proceeds from shirt sales will be donated to the The Teal House: Statesboro Regional Sexual Assault and Child Advocacy Center.

The Georgia Southern University Counseling Center provides students with a wide range of sexual assault resources and services. A team of mental health professionals is available to provide support and individual counseling for anxiety, depression and post-traumatic stress disorder that can result from a sexual assault. The offices are open from 8 a.m. to 5 p.m. Monday through Friday. Additionally, counselors provide assistance 24 hours a day through the University Police Department for psychological emergencies including sexual assault. For more information on Georgia Southern’s Counseling Center and available services, visit GeorgiaSouthern.edu/Counseling.