College of Education professor to speak at Smithsonian Institution 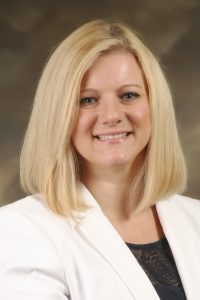 Amanda Glaze, Ph.D., an assistant professor in the Georgia Southern University College of Education, will be the featured speaker during the Smithsonian Institution’s Broader Social Impacts Committee’s annual meeting on April 29 in Washington, D.C.

Glaze’s presentation, “Laboring for Science, Laboring for Souls: Obstacles and Approaches to Teaching Evolution in the Southeastern United States,” will be broadcast live from Q?ruis Theater, which is located in the Smithsonian National Museum of Natural History.

“It is such a huge honor to me because of what the Smithsonian Institution represents,” Glaze, who teaches middle grades and secondary education, said. “My grandmother was a science teacher, and I remember from childhood looking through her books and collections and feeling like the Smithsonian was something special and represented to the world a collection of our nation’s history in so many areas.”

The presentation will examine Glaze’s research into evolution education, specifically in the Southeastern United States where there is perceived tension between religious worldviews and science. She focuses much of her research on student teachers and in-service teachers, who are on the “front line” when it comes to teaching scientific worldviews, according to Glaze.

“I hope to share the stories of people like myself who have grown up with misperceptions about science and beliefs as a result of conflict that can be easily mitigated through outreach and understanding,” she explained. “The South represents an area that has even greater conflict when it comes to topics in science like evolution, yet it is rarely studied because the culture can be difficult to understand if you are looking in from the outside. I hope to provide a lens for understanding and growth around the country by studying this conflict in the Southeast and the actions we are taking to mitigate conflict while respecting and including worldviews of all students.”

Glaze taught five years as a middle grades and high school science teacher in her home state of Alabama and Georgia before beginning her career in higher education. Her years in both the secondary and college classroom have given her firsthand experience of the perceptions and knowledge students have of evolution and the place it has in the field of science.

“As someone who grew up in a deeply religious family and who has navigated the conflict that can arise when science and beliefs are not always in agreement, I recognized the need to have conversations that bring everyone to the table rather than making assumptions or excluding people because of differences,” Glaze said. “The goal of science education is for all people to be scientifically literate. In order to reach that end, we have to first be willing to listen and learn, then we can build bridges that make science accessible and welcoming to all as a part of their
worldview, rather than something that conflicts with their worldview.”

The public presentation will include a 40-minute lecture by Glaze. Afterward, the Broader Social Impacts Committee will provide feedback and open up the floor to the attendees for discussion. To view the live webcast of the event, visit http://humanorigins.si.edu/about/events.

The Broader Social Impacts Committee was established by the Human Origins Program of the Smithsonian National Museum of Natural History. It is made up of professionals representing a variety of religious traditions, as well as science educators and religious studies scholars. The committee serves to assist the museum in developing resources that complement its education and outreach efforts and reach audiences affected by potential challenges at the intersection of scientific findings and religious reflection. Each year the Broader Social Impacts Committee hosts public events that serve to answer inquiries about human evolution.