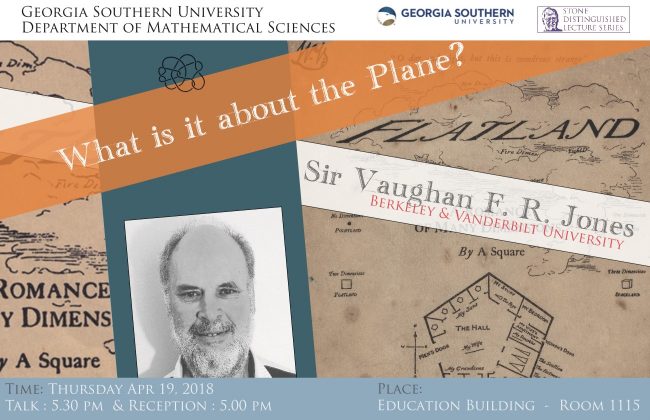 The Department of Mathematical Sciences at Georgia Southern University will host the inaugural lecture in the David R. Stone Distinguished Lecture series on the Statesboro Campus Thursday, April 19, at 5:30 p.m. in College of Education Building, Room 1115. A reception will be held prior to the lecture at 5 p.m. in the atrium of the lecture hall.

Sir Vaughn F. R. Jones, distinguished professor of mathematics at Vanderbilt University, known for his work in von Neumann algebras and knot polynomials, will present “What is it about the Plane?” Professor Jones received the 1990 Fields Medal, which is awarded once every four years to mathematicians under the age of 40 for outstanding discoveries in mathematics. The award is widely viewed as the Nobel Prize of mathematics.

The Stone Distinguished Lecture Series is endowed in honor of Professor Emeritus of Mathematics, David R. Stone, Ph.D., who taught at Georgia Southern University for 49 years, arriving in 1968 as an assistant professor, retiring from his full-time position in 2008 and teaching part-time through 2017.

Stone’s passion focused on inspiring students to study mathematics. He developed and taught the mathematics course in the Bell Honors Program curriculum, and later taught courses and directed honors thesis projects in the University Honors Program. He was also instrumental in starting the student chapter of the Mathematical Association of America on campus and advised the Math Jeopardy Team for many years.

Stone was a tireless worker within the mathematics education community, working with local schools,coaching math teams for tournaments and serving as state director of the Georgia Partnership for Excellence in Education.

Over the years, Stone was recognized for his many contributions to the profession. He received numerous awards including the 1993 Gladys M. Thomason Award for Distinguished Service and the 2005 John Neff Award from the Georgia Council of Teachers of Mathematics. He also received the Mathematical Association of America’s Southeastern Section Awards for Distinguished Service in 1998 and Distinguished Teaching in 2005, as well as the Certificate of Meritorious Service in 2009.

Stone’s 49 years of teaching and service to Georgia Southern and his service to the profession have been recognized by creating the David R. Stone Senior Mathematics Major Award, which is presented each year to outstanding graduating seniors in the department, and also through an endowment by Stone and his wife, Ann Stone.