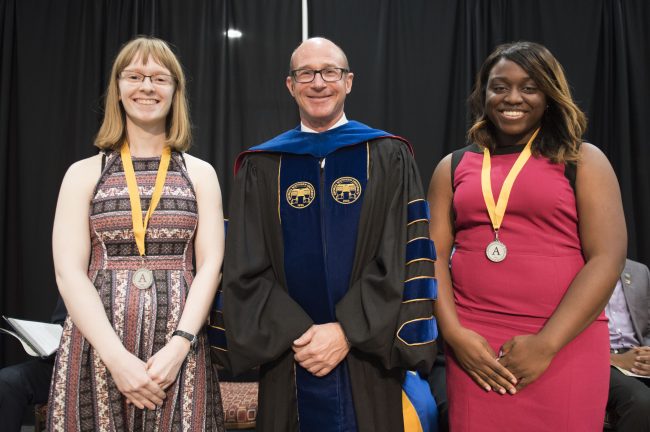 The evening’s highest honors were awarded to rehabilitation sciences major Mary Carpenter, recipient of the Gold “A” Award, a rare feat accomplished only by a student who earns a Silver “A” Award for both outstanding academic achievement and service. As such, she was eligible for the Bhatia Foundation Award, and garnered the distinct honor for her dedication to the betterment of humankind and the promotion of friendship and goodwill for all cultures.

The Outstanding Honors Student Award, which is bestowed on an honors student who best exemplifies exceptional academic achievement and distinguished service to the Honors Program, was presented to history studies major Abby Meert.

Business economics student Gayla Nichole Herbert earned the Joseph A. Buck Award, which is presented to a graduating senior who has held one or more leadership positions on the Armstrong Campus and best represents the qualities of leadership and citizenship.

History student Margaret Higgins was presented with the Post 9/11 Veteran Academic Achievement Award, which recognizes the student-veteran who, having served honorably in the nation’s military during the period following Sept. 11, 2001, demonstrated commitment to her education by attaining the highest cumulative grade point average among graduating veterans.