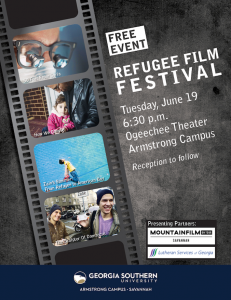 Georgia Southern University, Mountainfilm on Tour-Savannah and Lutheran Services of Georgia have teamed up to host the Refugee Film Festival on Tuesday, June 19, at 6:30 p.m. in the Ogeechee Theatre on the Armstrong Campus in Savannah. A reception will follow the films. The event is free and open to the public.

“The timing of this event could not be better,” said Georgia Southern Director of Military and Local Government Affairs Peter Hoffman. “It coincides with World Refugee Day, designated by the United Nations as an expression of solidarity with people who have been uprooted from their homes by war or persecution. And this year, the theme for Mountainfilm on Tour is “Migration,” with a number of films that directly address the issue of refugees. Georgia Southern embraces the values of civility, kindness, respect and social responsibility, and is proud to join with Lutheran Services of Georgia in highlighting the great work they do while furthering our mission of providing transformative learning opportunities for our students.”

The festival will feature the four acclaimed films below in consecutive order: