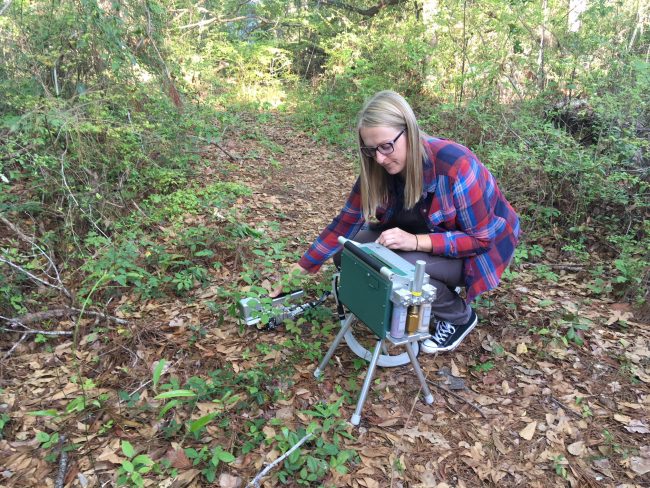 Virtually all life on Earth depends on the process of photosynthesis, in which plants use sunlight to convert carbon dioxide and water into simple sugars.  A key question for biologists is whether global climate change will help or hinder this process.  Georgia Southern University professor Kerrie Sendall, Ph.D., and her colleagues have found that “it depends.”

Published today in the journal Nature, Sendall and her colleagues describe the results of a 3-year field experiment designed to understand the effects of increased temperatures on photosynthesis in 11 tree species.

A warming climate might be beneficial by increasing the rate of the chemical reactions involved in photosynthesis.  However, warmer temperatures are also associated with lower or less predictable rainfall and greater water loss from plants.  This slows the rate of photosynthesis.  Thus, the effects of warmer temperatures might be positive when moisture is plentiful and negative when conditions are drier.

Sendall and her colleagues set out to test this hypothesis in a field experiment in the forests of Minnesota.

“In boreal forests, like those in Minnesota, many species of trees are near the southern (i.e., warm) limit of their distribution,” explained Sendall.  “Thus, they may have limited capacity to respond to a warming climate.  These trees are good candidates to detect the early effects of global warming.” 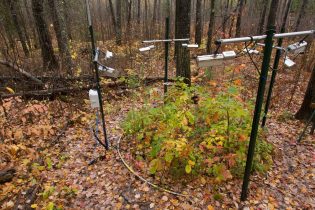 The research involved 24 experimental plots in which 11 different species of trees were planted in each.  Lamp heaters and soil heating cables were used to increase temperature by 3.4 C (6.1 F) on half the plots.  The other half remained at ambient temperature.  The scientists then monitored temperature, moisture, and the rate of photosynthesis.

“Field experiments like this one are logistically complex and labor intensive, and they lack the precision of a lab experiment,” says Sendall.  “However, the big advantage of working in the field is realism; we can see how plants respond in their natural environment.”

Sendall and her colleagues found that warmer temperatures did indeed increase the rate of photosynthesis.  However, this was true only when adequate moisture was available.  In all 11 tree species, the beneficial effects of warming disappeared when the soil became drier.  Furthermore, the warmer temperatures themselves hastened evaporation of water from the soil. 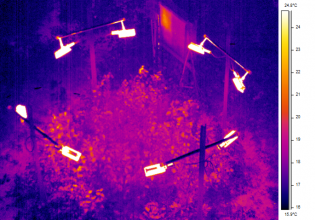 Studies like this are vital to understanding the impacts of global climate change.

The rate of photosynthesis ultimately determines how fast plants can produce wood, fiber, or food for human use.  How this rate changes in a warming climate is of profound significance for a growing human population.

“Faster plant growth is often mentioned as a possible benefit of a warmer planet,” says Sendall.  “However, our results caution against simple conclusions like this.  In the seasonally cold forests that we studied, low soil moisture will put the brakes on, or maybe even reverse, this potential benefit.”