Georgia Southern plans celebration for community with A Day for Statesboro 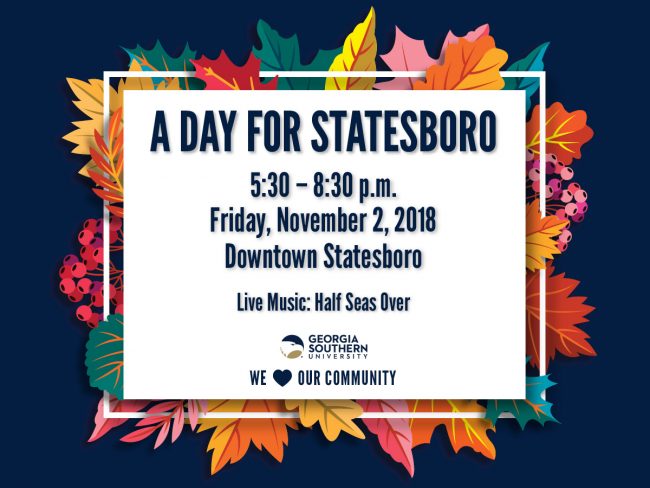 A 45-year-old tradition that has strengthened the relationship between Georgia Southern University and the Statesboro-Bulloch County community will continue on Nov. 2 in Statesboro, but with a slight twist.

This year’s A Day for Southern event will become A Day for Statesboro, a celebration hosted by Georgia Southern in conjunction with the Downtown Statesboro Development Authority (DSDA) that will allow the University to show its love for the community with live music, True Blue spirit, family activities and more. The festivities will kick off in downtown Statesboro at 5:30 p.m.

“This year, in the 45th year of the A Day for Southern campaign, we decided to give thanks to all our supporters through hosting an appreciation event for this community, which has shown us support, not only during all the years of the campaign, but since before our very founding 112 years ago when members of this community rallied to bring a college to the Southeastern part of our state,” said Gloria M. Goosby, director of Annual Giving at Georgia Southern.

The A Day for Southern campaign began in in 1973 by community members as a way to show support for the then-growing Georgia Southern College. In its first year, the community joined together and raised thousands of dollars for the University in a single day.

Since, the event has grown to include community and on-campus giving campaigns that have resulted in millions of dollars being donated to the University benefiting various programs, departments, colleges and more.

“The Statesboro-Bulloch County community has played a vital role in the growth and success of Georgia Southern University,” said Goosby. “Figuratively and literally, Georgia Southern would not exist without the support of local business and community leaders.”

Bob Mikell, a former chair for the A Day for Southern community campaign, Georgia Southern alumnus and ninth generation Bulloch Countian, believes any time the historic relationship between the University and community can be celebrated it is a “good thing.”

President of the Statesboro-Bulloch Chamber of Commerce, Georgia Southern alumna and past community chair Phyllis Thompson, believes in the importance of interaction between community members and University representatives. The celebration is a meaningful way to dedicate time for that, she said.

“The partnership of Georgia Southern and the community to reconnect and reinvigorate our Blue Mile evidences how we continue to work together and depend on each other,” Thompson said. “The decision to stage A Day for Statesboro downtown is a reflection of that award-winning, ongoing project.”

Goosby encourages the community to join the University and DSDA for this fun-filled First Friday event and celebrate the strong town-gown relationship.

“We hope this event serves to show how grateful we are to be a part of this community and how much we appreciate the time, talent and financial support it has offered us over the years,” she said.