Department of Biology researchers use DNA to monitor endangered species 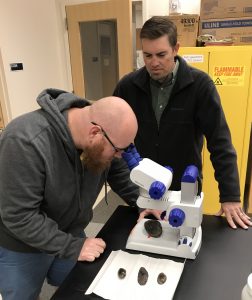 Biology professors Jamie Roberts, Ph.D. and Christian Cox, Ph.D., were awarded three years of funding by the North Carolina Wildlife Resources Commission. The funding will be used to develop the techniques necessary for a comprehensive genetic monitoring program for eight imperiled freshwater mussel species in that state.

The highest diversity of freshwater mussels in the world can be found in the rivers of the southeastern United States. These mussels are ecologically important because they help maintain water quality by filtering vast amounts of water as they feed.

However, their numbers have declined dramatically due to dams, pollution and other forms of habitat degradation. As a result, mussel species tend to occur in small populations that are geographically isolated from other populations. Small, isolated populations tend to lose genetic diversity and their ability to adapt to changing conditions, putting these populations at high risk of extinction.

The first step in preventing these extinctions is to quantify genetic relationships among mussel populations and to identify possible “hotspots” of genetic diversity. Roberts and Cox are leading the research to help the state of North Carolina take this first step.

“Equipped with this information, state biologists can direct their resources toward actions with the greatest potential for successful species recovery,” said Roberts.

Roberts and Cox will use genetic sequencing to scan the DNA code of hundreds of mussels, representing each of the imperiled species collected from dozens of different rivers. These DNA sequences will then be examined to find single-nucleotide polymorphisms (SNPs), or points in the DNA code where genetic differences can be found among individuals or populations. SNPs serve as “genetic markers” to identify rivers with genetically distinct populations or populations with low-genetic variation that may be at high risk of extinction.

“Traditionally, developing genetic markers was an expensive, time-consuming process performed on a species-by-species basis,” says Cox. “By applying the technology of high-throughput genomics, however, we can simultaneously develop hundreds or thousands of SNPs for multiple species at a time.”

The research by Roberts and Cox will ultimately provide the basis for a cost-effective genetic monitoring program that will ensure that conservation funds are spent effectively.