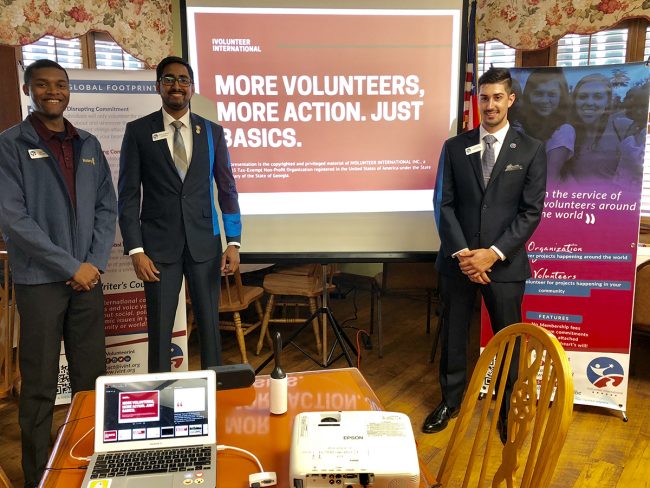 Tajae Francis, Nipuna Ambanpola and Tyler D’Alto are connecting people to volunteer opportunities around the world through their nonprofit organization IVolunteer International Inc.

Three Georgia Southern University students with a passion to serve others are connecting people to volunteer opportunities around the world through their nonprofit organization IVolunteer International Inc.

“Our vision is creating a volunteer inside every human being,” said Nipuna Ambanpola, co-founder and executive director. “It’s in everybody, but we need to bring it out in them.”

Ambanpola is joined on the board of directors by Tajae Francis and Tyler D’Alto. Together, they have taken on strategic roles to further the vision and have now connected more than 2,000 people to volunteer projects around the world.

Ambanpola’s vision is based in his Sri Lankan roots. In his culture, volunteering is a way of life, so he developed a passion for helping others early on.

However, he noted, around the world, most volunteer opportunities require a paid membership to an organization, which isn’t always feasible for those who wish to volunteer.

“I thought, ‘What if there’s a way that volunteering could be free, accessible to everybody and people can volunteer for causes they’re most passionate about,’” said Ambanpola. “I think it will unite the world and connect communities.”

Ambanpola understands the importance of connecting. In 2015, he eagerly began at Armstrong State University on a Georgia Rotary Student Scholarship but found himself feeling out of place because he struggled to connect with students on campus. Consequently, he was struck with the idea of a free volunteerism service and pitched it to several people who had strengths he knew would help the organization succeed.

Francis, a native of Kingston, Jamaica, already had a passion for helping others and saw IVolunteer International as a way to expand his volunteerism.

“I was happy that I found an organization that essentially does the same thing when I was the (former) president of my Rotaract Club,” noted Francis, who served in the Savannah area Rotaract Club as president. Rotaract Clubs bring together people ages 18-30 in communities worldwide to develop leadership and professional skills and have fun through service.

In his role with IVolunteer International, Francis serves as the U.S. representative and is responsible for the group’s outreach and communications, speaking frequently to different organizations to rally support.

D’Alto, from Richmond Hill, Georgia, joined the team as the chief financial officer. He is responsible for finances, budgets and other transactions including investments and commitments to fundraising.

“I got involved because I wanted to empower people and help them build networks,” he said.

To date, one of the organization’s favorite efforts has been Project Senehasa, in which they collected and delivered clothing and stationary to a primary school in the rural Uva province of Sri Lanka.

Other important projects have included organizing a hair-donation campaign in Sri Lanka, volunteering at the National Youth Model United Nations, collecting rations for 2017 flood victims in Sri Lanka and partnering with Without Borders to connect volunteer teachers.

Another vital global initiative is Birthday Deed, which encourages individuals to give back on their birthdays by doing something good in the world.

In 2019, IVolunter International will launch a mobile app that will geotag the user’s location and show volunteer opportunities nearby. The app will provide the location, date, time and information about the host organization. It will also allow volunteers to sign up and see who else has volunteered for the project. Users will be able to track volunteer hours and share projects with their friends.

“My hope is volunteers around the world will make great impacts in their communities,” said Nipuna.  “In years to come, I’ll be able to look back and know that our mobile app played a role in connecting them to volunteer projects that changed lives. That’s the legacy I look forward to leaving behind. The legacy that we built an app that helped make the world a better place.”

For more information on IVolunteer International, to post a project, volunteer for a project or to donate to this organization please visit https://www.ivint.org/2018-campaign/.