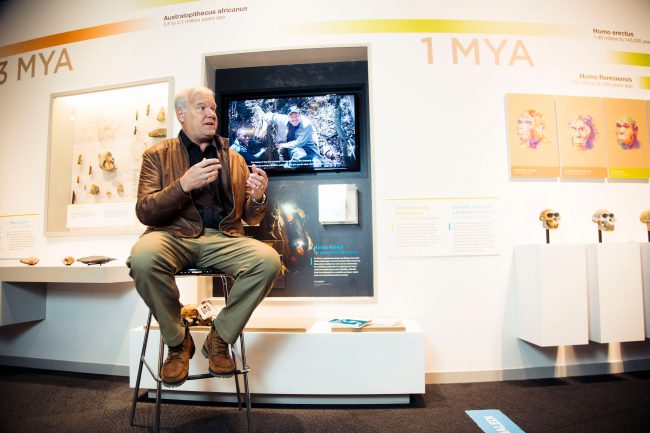 Internationally renowned paleoanthropologist and Georgia Southern University alumnus Lee Berger, Ph.D., along with leaders of the Perot Museum of Nature and Science in Dallas and South Africa’s University of the Witwatersrand (Wits University), have made it possible to delve deep within a South African cave to discover and recover some of the most famous ancient human fossils in scientific history by creating a world-first virtual reality (VR) app.

Berger recently dominated world science headlines after leading the Rising Star Expedition, which led to the discovery of Homo naledi, a new species of human relative. The app allows people all over the globe to virtually tour the cave that very few people, including the group of scientists known as the Underground Astronauts, have visited in person due to the extremely narrow, 8-inch chute through which it is accessed. 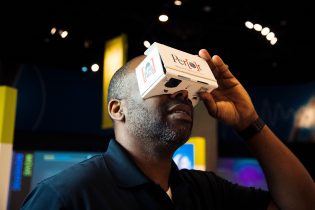 “As I would never be able to actually get into the Dinaledi Chamber, one of the most exciting things for me personally is that through the Dinaledi app I can actually see and experience what it is like to be in the chamber where these wonderful discoveries were made,” Berger said. “And even more exciting, I can share this first-time experience with young fossil hunters from all over the world.”

Berger was joined by Perot Museum CEO Linda Silver, Ph.D., and Perot Museum research scientist, member of the Underground Astronauts, and Director of the Center for the Exploration of the Human Journey, Becca Peixotto, Ph.D., for a live news conference to announce the app watched by journalists and academics from across the world.

The Museum collaborated with Wits University to initially create this experience, which was brought to fruition by Dallas creative-technology company Groove Jones, for the Museum’s newly transformed Being Human Hall. However, they also wanted to extend the VR journey beyond the walls of the Museum.

The app offers narration in six languages from some of the explorers and scientists from Berger’s Rising Star expedition, and viewers can explore and virtually hold fossils from the remote cave. The translated experiences are available on the app in English, American and European Spanish, and the African languages of isiZulu, Setswana and Sesotho.

The free app is optimized for Google’s VR platform, Cardboard, but it is compatible with any headset. It can be found by searching for Dinaledi in the Google Play and Apple App Store. Learn more about the cave exploration experience at perotmuseum.org/DinalediVR.