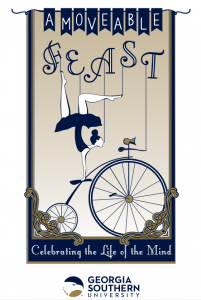 Georgia Southern University announces the schedule for the 2019 Moveable Feast lecture series, presented by the College of Arts and Humanities, in cooperation with the College of Behavioral and Social Sciences, in historic venues throughout Savannah. All events begin at 6 p.m. and are free and open to the public.

The fifth annual series, which kicks off on Jan. 10, will feature monthly lectures and performances by distinguished Georgia Southern faculty from the Statesboro and Armstrong campuses.

“Armstrong’s Moveable Feast series offers the Savannah community the opportunity to celebrate the vital role the liberal arts plays in our society,” noted College of Arts and Humanities Associate Dean Teresa Winterhalter, Ph.D. “We invite the public to join our accomplished faculty and explore thought-provoking ideas in a wide range of fields, from history and literature to social sciences and the arts.”

Media may contact Jennifer Wise at (912) 478-2301 or jwise@georgiasouthern.edu for interview and image requests.

The complete schedule of events follows:

On the occasion of the Jepson Center’s “Monet to Matisse” exhibition, this concert and lecture will illuminate a series of connections between musical and visual creators during the times of social turmoil in which Claude Monet and Henri Matisse shaped their art. Martín Gendelman will discuss the historical, cultural and biographical backdrop of the selected compositions from late 19th and early 20th-century composers, from Chopin to Gershwin, whose classical compositions Benjamin Warsaw will introduce and perform. Together they will illustrate the mirroring of musical and artistic movements that have influenced our culture for more than a century.

Educational disparities in Savannah, in Georgia and in the South persist. Media images provide visual evidence of an unjust status quo. The era of segregation in the United States is not over. With this recognition, we must ask ourselves how we can better advocate for racial justice in our society and in our daily lives. Building on the premise that a critical understanding of racism will strengthen our ability to advocate for justice in our local and global communities, this panel of scholars will provide a survey of contemporary research on race and racism. Each will examine how racism continues to affect our institutions, our media and our daily interactions. Together they will explore how educational discrimination and representations of African-Americans in media help us visualize the complex social systems in which racism persists. By the time they conclude, the panelists hope to have challenged you to examine biases you may hold.

The initial discovery of the Dead Sea Scrolls just over 70 years ago is undoubtedly one of the most important finds of the 20th century. The scrolls are both the earliest manuscripts of texts found in the Hebrew Bible and some of the most informative examples of Jewish sectarian literature. The varied documents embody a long tradition of scribal activity stretching back hundreds of years into the days of the Israelite monarchy. In addition to exploring scribal techniques in ancient Israel, Dan Pioske and Jason Tatlock will address some of the unique material contained within the Dead Sea Scrolls, such as early references to Suffering Messianism and the Binding of Isaac or Akedah.

Salt marshes, rivers, lakes and the Atlantic Ocean are integral parts of Coastal Georgia’s culture and heritage. This presentation highlights the ways researchers preserve the stories of maritime communities through collecting oral narratives and listening for echoes of the past. Kurt Knoerl will explore how shipwreck sites along our coast often act as accidental time capsules, containing information about vessels and their demise, as well as their crews, passengers, shipbuilders and many others. Focusing on the contemporary era, Jennifer Sweeney Tooks will trace representative stories coastal Georgians tell of life on the water, paying particular attention to those about commercial fishing and its importance to the state’s living history and culture. Together they will demonstrate how — both on and below the water — many Georgia communities have depended on the coastal environment for their cultural base for generations.