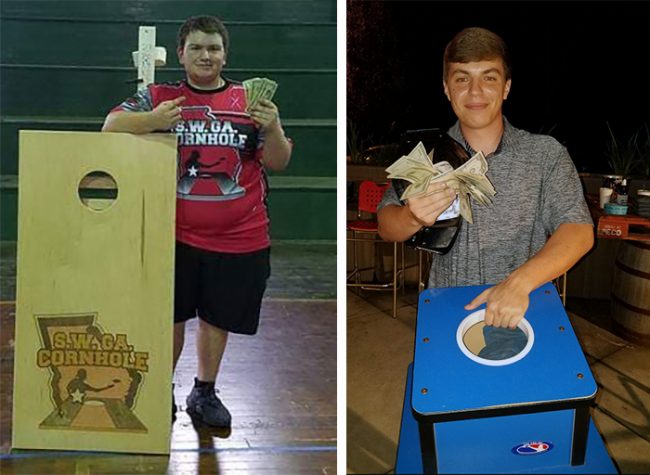 Graham, left, and Yaklin pose with prize money from past tournaments.

To most people, cornhole is a game played during cookouts, tailgates and beach trips, but for Georgia Southern University first-year students James Graham and Hunter Yaklin, it’s an opportunity for students from the Armstrong and Statesboro campuses to come together for a shot at earning $25,000 in scholarship money.

The duo will spend their holiday break competing in both the doubles and singles tournaments at the National College Cornhole Championship on Dec. 29 and 30 in Myrtle Beach, South Carolina. Graham said he’s looking forward to competing in the tournaments televised on ESPN.

“Representing Georgia Southern on ESPN is a dream come true and an honor,” he said. “I’ve wanted to play cornhole professionally ever since I first played it in 9th grade.”

Yaklin, who is a biology major on the Armstrong Campus, and Graham, who is a sports management major on the Statesboro Campus, met at the Georgia State Championships of Cornhole where Yaklin won the Junior State Title.

Yaklin played in local tournaments for about a year before competing against the best players in the world in American Cornhole Organization and American Cornhole League (ACL) tournaments. His first year playing he won the Georgia 18-and-under state championship. Last year he won the ACL Southeastern Conference competitive singles title.

The collegiate tournaments are open to anyone, but the competition will be high. Yaklin is tied for the No. 82 spot in the national overall ACL rankings, and he’s ranked No. 9 in the Georgia ACL rankings. Graham is ranked No. 89 in Georgia. The scholarship prize for the doubles tournament is $15,000, which the duo will split if they win, while the singles tournament offers a $10,000 prize. They have both won hundreds of dollars in tournaments.

“I love traveling and meeting new people, which allows me to play the best in the game and better my game,” Yaklin said. “I love to compete and have fun doing it.”

Yaklin, who is from Savannah, said he practices regularly and plays in one to three tournaments a week to staysharp. Graham, who is from Vada, Georgia, and whose dad is also ranked in the top 100 in the country, has a simpler approach.

“I just don’t think about it too much and throw the bags,” Graham said.

The team will look to balance each other out during their first tournament representing Georgia Southern, but the duo definitely knows what’s at stake with the two campuses uniting.

“I want (Graham) and I to be the ones that bring the first ever National Cornhole Championship to Georgia Southern,” Yaklin said. “Being able to represent my school on ESPN will be one of the biggest accomplishments in my life.”