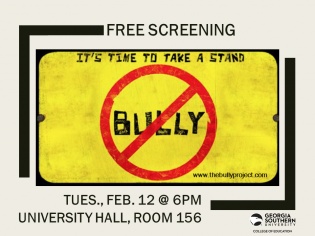 On Tuesday, Feb. 12, Georgia Southern University College of Education (COE) will host a free screening of “Bully,” a film documenting the effects of bullying on school-aged students and their families. The screening, which is free and open to the public, will begin at 6 p.m. in University Hall, room 156, located on the Armstrong Campus in Savannah.

The documentary, filmed over the course of a single school year, follows five students and their families as the students cope with cruelty from classmates while trying to fit in. Transcending geographic, racial, ethnic and economic borders, the film examines the growing issue of bullying in schools today and how students, parents, teachers and administrators are facing the problem.

According to filmmaker Lee Hirsch, Sundance Film Festival and Emmy-Award winner, over 13 million American kids will be bullied this year, making it the most common form of violence experienced by young people in the nation.

The film sparked an ongoing effort called “The Bully Project,” which is a global movement to stop bullying and transform children’s lives by changing the culture of bullying into one of empathy and action. The movement website, www.thebullyproject.com, includes tools and resources on bullying for educators, students, parents and advocates.

Following the screening, the COE will host a Q&A session with local professionals in the fields of social work, juvenile justice, counseling and bully prevention in schools.

This screening is the first in a series of five events that will take place on the Armstrong Campus during the Spring 2019 semester. The series is being offered at no charge to students or the community as a result of a Campus Life Enrichment Committee grant written and received by COE faculty Regina Rahimi, Ed.D., Kathleen Burke-Fabrikant, Ph.D., and David Owens, Ph.D.

The additional screenings will include: “The Cartel” on March 5; “The School in the Cloud” on March 27; and “Elementary Genocide” on April 16.