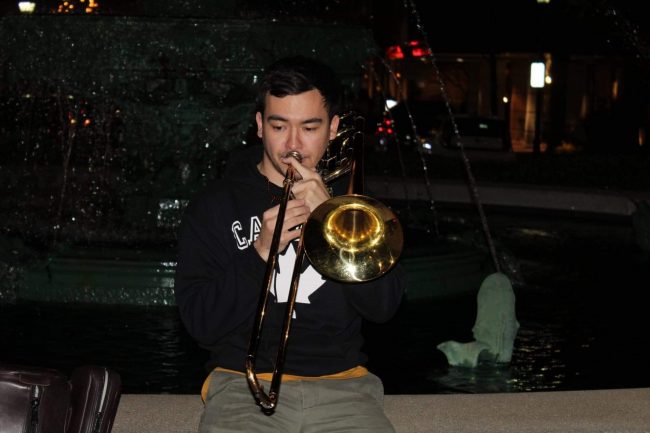 Award-winning trombonist and Georgia Southern University alumnus Eric Spencer will be back on campus March 4 as a member of the orchestra during a performance of “Legally Blonde, the Musical.” The show will start at 7:30 p.m. at the Performing Arts Center (PAC) on the Statesboro Campus.

“Playing at the PAC again is like getting really great dinner with an old friend,” Spencer said. “I was super excited when I found out that Statesboro was on the tour itinerary, and I can’t wait to perform in the PAC one more time.”

Spencer graduated in December 2016 with a Bachelor of Arts in music. At Georgia Southern, Spencer won several awards, competitions and departmental scholarships. He was a four-year recipient of the Lewis and Charlene Stewart Jazz Scholarship, and he won the Georgia Southern University Symphony Concerto Competition, earning a solo performance with the orchestra.

“Eric Spencer possesses the four criteria absolutely necessary to be successful in the music business,” said Rick Mason, DMA, associate professor of trombone and director of the jazz ensemble. “He has an exceptional talent, a high level of intelligence, an extraordinary work ethic and an unwavering desire for success. Eric is only beginning what will undoubtedly be an incredible career in a highly competitive profession.”

During his junior year, Spencer won the Jazz Trombone Chair in the Disney All-American College Band, competing against trombonists from major music schools and conservatories throughout the U.S.

Since graduation, Spencer has been in demand as a freelance trombonist, traveling around the world. He began his work as a professional musician with the Princess Cruise Line, and he was later chosen to play trombone for the national touring company of the theatrical production of “How the Grinch Stole Christmas.”

On tour, he has performed in many major and historic music venues throughout the nation. In 2018, Spencer began an Asian tour of “Legally Blonde, the Musical” beginning at the Marina Bay Sands in Singapore. Later in 2018, Eric joined the cast of the revival of “A Chorus Line” for a tour of Japan. He returned to the U.S. late in 2018 to finish the “Grinch” tour and was booked for the U.S. run of “Legally Blonde.”

For more information and to purchase tickets, visit https://academics.georgiasouthern.edu/pac/.

Tags: Alumni, College of Arts and Humanities, Department of Music