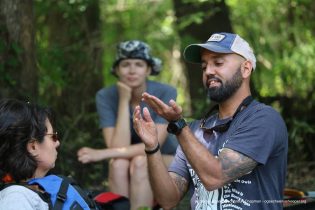 Georgia Southern Associate Professor of Biology Checo Colon-Gaud, Ph.D., is one of 153 researchers from 40 countries who has just published a groundbreaking study of ecosystem function in rivers around the world.

“Carbon cycling, including the rate at which organic matter decomposes, is an important measure of how river ecosystems are functioning,” said Colon-Gaud. “It affects the productivity of rivers at a local scale, and it has significance for climate at a global scale.”

Colon-Gaud, with the help of students from the Department of Biology, sampled four sites across southeastern Georgia. These sites were chosen to represent the “blackwater” rivers of our region, with their distinctive tea-colored water. Using the standardized methods, Colon-Gaud placed small cotton strips into the water at each site as a carbon source. He collected them after a period of time so that the rate at which organic matter decomposed could be measured.

Overall, the study found that factors such as temperature and moisture have a major influence on the rate of carbon cycling in river ecosystems. Due to ongoing climate change affecting temperature and rainfall at a global scale, the researchers warn that human activities will greatly affect ecosystem function in rivers.

“The information generated through this collaborative effort will help us predict how river ecosystems are likely to change in a warming climate,” said Colon-Gaud. “We now have a baseline we can use to detect anthropogenic changes in vital ecosystem processes such as the rate at which organic matter decomposes.”

The results of this study, published in the journal Science Advances, can be found here.